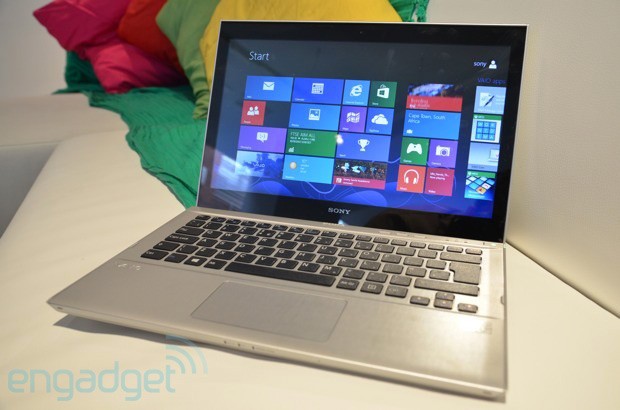 Here’s the thing with Windows 8: staring at those live tiles feels kinda weird if you can’t reach out and touch them. That’s why Sony has upgraded its Vaio T13 Ultrabook with a touch panel (making it technically the T13-2), allowing you to reach out across the keyboard and swipe away to your heart’s content. We’ve just left some fingerprints on a high-spec model with a Core i7 processor, 1366 x 768 resolution, 256GB SSD and 8GB RAM, which will sell in the UK from October 26th priced somewhere north of £1,000 (or $1,600, though Sony doesn’t set exact prices). A more modestly equipped i7, with 4GB and a 500GB hybrid drive should be somewhere around £900 ($1,400), while an entry-level i3 will start at £700 ($1,100), give or take. Bear mind that the dollar prices will be much lower than these currency conversions suggest — for reference, the original T13 starts at just $770.

Our first impression was that enabling touch on this traditional form factor was slightly awkward, especially if the purpose of touching the screen was to achieve something that would have been more readily accomplished with a tap on the keyboard — such as adjusting brightness, scrolling or returning to the home screen. On the other hand, the UI was incredibly responsive on the Core i7 processor and over time the touchscreen may well come to feel more natural than the touchpad within Microsoft’s new OS. Just bear in mind that enabling touch comes with a couple of sacrifices, aside from any price premium: it adds 100 grams and 1mm in thickness to an Ultrabook that was already on the chunky side, due to the addition of tougher hinges as well as the extra layer in the display. Check out our hands-on video after the break and make up your own mind.