Skyrim‘s second serving of DLC, Hearthfire, launched on PC today, meaning that eager homebuilders can get to work constructing their dream house (or at least something resembling their dream house). Hearthfire costs the same on Steam as it does on Xbox 360 – $5 – and for that paltry amount, you get to buy up plots of land, collect raw materials, and then use those materials to build a house, which could potentially include things like a greenhouse or an armory. You can also move your spouse into your freshly-built home and, if you really want your Skyrim experience to mirror real life, adopt children. 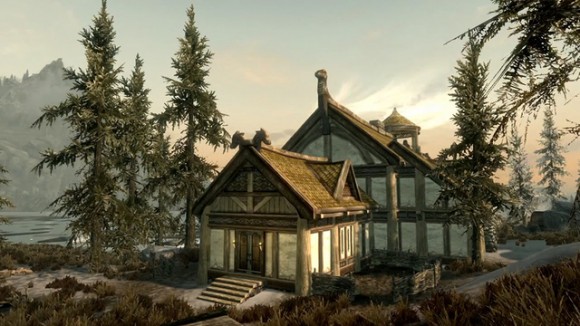 That’s all well and good, but while Xbox 360 and PC players are enjoying both Dawnguard and Hearthfire, they’re still nowhere to be seen on PS3. Unfortunately, it looks like that will remain the case for a least a while longer, as Bethesda VP of PR and marketing Pete Hines says that there isn’t anything new to report as far as PS3 DLC is concerned. “I don’t have any info on Hearthfire, Dawnguard, or DLC in general for PS3,” Hines said on Twitter. “We’re still on it. Will share update when I have one.”

Bethesda’s issues with Skyrim on PS3 have been well documented. First, there was that particularly nasty save bug that bloated save files to the point where lag made the game unplayable on PS3, and now, the studio is having some issues porting its Skyrim DLC to the console. Bethesda stays away from specifics when talking about its DLC problems on PS3, so we’re not sure exactly what the studio is dealing with, but we do know that the problems are severe enough that Sony had to step in to lend a helping hand.

Sadly, it’s looking increasingly likely that PS3 players won’t get any Skyrim DLC at all. Bethesda said that it won’t release Dawnguard or Hearthfire on PS3 in a broken state if it can’t solve these issues, and the lack of significant updates suggests that progress is slow-going at best. We’ll be keeping our fingers crossed and watching for more updates from Hines and Bethesda, so keep it tuned to SlashGear for more information.

Skyrim: Hearthfire now on PC, no new updates on Dawnguard PS3 is written by SlashGear.
© 2005 – 2012, SlashGear. All right reserved.