What a difference a display makes: in the case of KDDI’s AQUOS PAD SHT21, announced yesterday, it’s the promise of more than double the runtime simply by switching to Sharp’s IGZO panel technology. The new LCD screen system – which plays with chemistry to make pixels smaller and thus reduce backlighting demands – has shown up on its second device for the Japanese market, so we wasted no time in checking out the new 7-inch Android tablet. Check out our hands-on video and some first impressions after the cut. 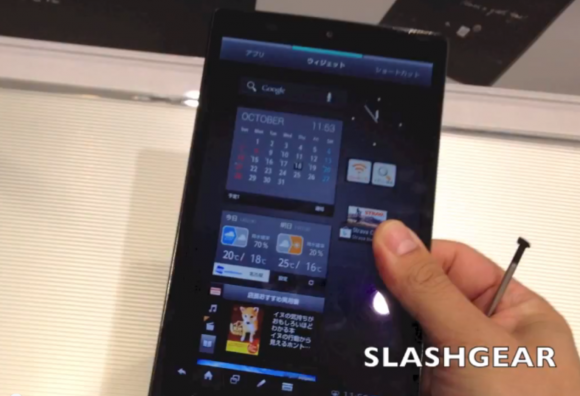 However, it’s the IGZO screen that’s the real talking point here. Most of the time, it looks just like a regular LCD IPS panel, only it’s sipping roughly half the power. Crank up the brightness, however, and it’s significantly brighter at its maximum than a traditional tablet; we weren’t able to take the SHT21 outdoors, but from what we’ve seen we’ve little doubt that you could comfortably use it without having to shade the screen in strong sunlight.

In the hand, it’s easier to hold than our other Japanese Android tablet of preference, the NEC Medias Tab UL, and the digital stylus works well for navigation and sketching. Android 4.0 runs smoothly, even with KDDI’s customizations, and overall it’s slim and lightweight. KDDI is yet to confirm pricing, though we know the SHT21 will hit shelves in December.

With battery technology proving to be the laggard in today’s digital arms race, technologies like IGZO are becoming increasingly important to squeeze runtime out of devices without weighing them down. So far nobody at Sharp is saying when IGZO panels will show up on devices outside of Japan, but we’re hoping it’s sooner rather than later.