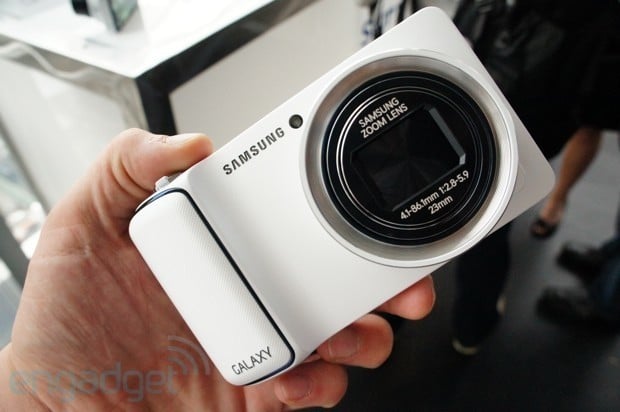 Samsung’s Android-powered Galaxy Camera is a bit of a wild card, marrying Google’s Android Jelly Bean OS with a 16-megapixel camera — heck, it’s even got a 4.8-inch 1,280 x 720-pixel (308 ppi) touchscreen display. Yup, rather than offering a digital viewfinder out back like a normal digital point-and-shoot, the Samsung Galaxy Camera offers a multitouch panel; the entire back consists of that 4.8-inch screen, edge-to-edge. It’s not all touchscreen, though — several buttons (controlling a pop-up flash, power, zoom toggle, and shutter release) are also part of the somewhat bulky build. Beyond the WiFi radio built in, the Galaxy Camera also comes with 3G/4G support via micro-SIM — which we now know at least one carrier will support: AT&T.

During an event with the cellular data carrier this evening, we got our hands-on the Galaxy Camera once more (albeit now with an AT&T micro-SIM on board). That speedy 1.4GHz quad-core processor helped us along, speedily swiping through Jelly Bean’s panes and launching its photo app promptly. Apps like Instagram were also on display, allowing for even nicer photos to be defiled by software filters (we kid!). The AT&T connectivity allowed us to upload photos directly to the cloud while snapping, utilizing its Auto Cloud Backup feature; image quality isn’t quite professional-grade, but its no slouch either.

The Galaxy Camera is, for all intents and purposes, a full-on Android smartphone … minus that whole “phone” thing. Its heft is perhaps more than we’d like in a point-and-shoot, but that gigantic — and gorgeous — viewfinder out back certainly helps assuage our space concerns. The device arrives at both carriers and camera retailers this October for an unknown price.

Update: We’ve added a second gallery with a few shots we snapped with the Samsung Galaxy Camera at the event — forgive them if they’re not spectacular. The heat of the moment!

Update 2: We’ve added even more photos shot with the Galaxy Camera in to the second gallery below, and a quick hands-on video just after the break.

Samsung Galaxy Camera marries Android and photography on AT&T, we go hands-on (update: video!) originally appeared on Engadget on Thu, 04 Oct 2012 17:25:00 EDT. Please see our terms for use of feeds.