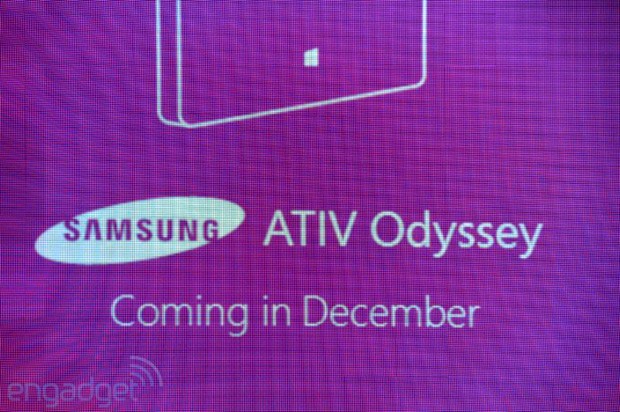 Microsoft’s ultimate Windows Phone 8 event mostly expanded on a familiar story, but it did leave us a surprise twist near the end. The company confirmed that Samsung will bring its own Metro-tinged experience to Verizon through the ATIV Odyssey this December. Unfortunately, that’s about all we know on an official level: Microsoft even used a placeholder graphic rather than show Samsung’s real-world design. However, that awfully familiar-sounding name suggests that Samsung and Verizon are directly exploiting that Odyssey codename which many associated with the ATIV S. If so, we’re looking at a device that’s not at all far off from a GSM equivalent, keeping the Snapdragon S4, LTE and both 8- as well as 2-megapixel cameras. Whether or not the Super AMOLED screen dips to a slightly lower 4.65-inch isn’t as known. Even so, the ATIV Odyssey is at least another sign that Verizon will have much more than a token Windows Phone lineup this time around.

For more, check out our Windows Phone 8 event liveblog!

Samsung ATIV Odyssey brings even more Windows Phone 8 to Verizon this December originally appeared on Engadget on Mon, 29 Oct 2012 14:27:00 EDT. Please see our terms for use of feeds.