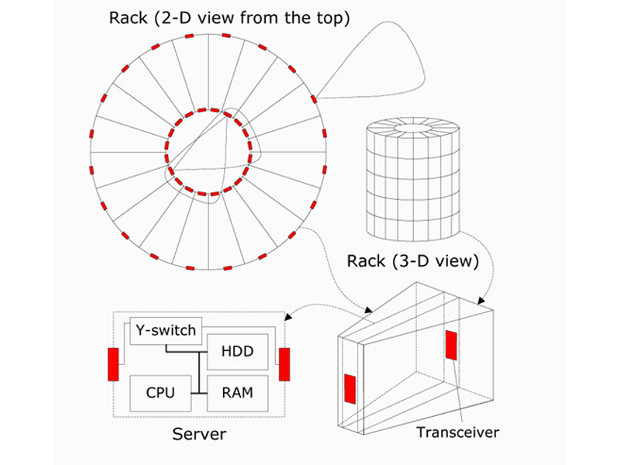 Researchers from Microsoft and Cornell University want to remove the tangles of cables from data centers. It’s no small feat. With thousands of machines that need every bit of bandwidth available WiFi certainly isn’t an option. To solve the issue, scientists are turning to two sources: the cutting edge of 60GHz networking and the 19th century mathematical theories of Arthur Cayley. Cayley’s 1889 paper, On the Theory of Groups, was used to guide their method for connecting servers in the most efficient and fault tolerant way possible. The findings will be presented in a paper later this month, but it won’t be clear how effectively this research can be applied to an actual data center until someone funds a prototype. The proposed Cayley data centers would rely on cylindrical server racks that have transceivers both inside and outside the tubes of machines, allowing them to pass data both among and between racks with (hopefully) minimal interference. Since the new design would do away with traditional network switches and cables, researchers believe they may eventually cost less than current designs and will draw less power. And will do so while still streaming data at 10 gigabits per second — far faster than WiGig, which also makes use of 60GHz spectrum. To read the paper in its entirety check out the source.

On the Feasibility of Completely Wireless Datacenters (PDF)  | Email this | Comments