For those of you not already watching the live video feed of the Felix Baumgartner jump from space down to the planet in a Red Bull stunt for the record books, now’s a good time to start – he’s jumped! This jump had been cancelled earlier in the week due to weather conditions then postponed for the same reason, here working with conditions that allow the jump to go on optimally (so far) straight down from 120,000 feet / 36,576 meters above the ground. If all goes as planned, this mission will break more than one world record, and will be more than just a little bit of a good PR bit for the Red Bull brand. 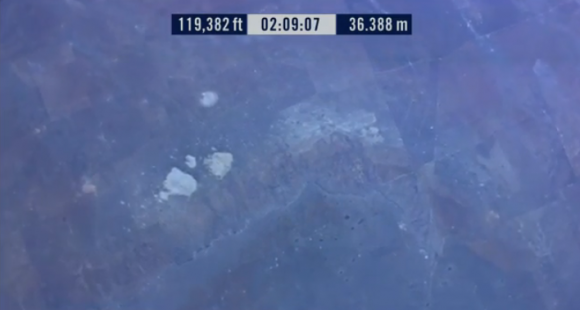 This mission will (or already has, depending on when you’re reading this) break the record for the first human to break the sound barrier in freefall. That’s a fabulous 690 miles / 1,110 kilometers per hour straight down without any propulsion other than gravity, incase you did not know. It’s already a record-breaker right as Baumgartner exited the craft he was lifted up in as this becomes the highest skydive in recorded history. Not that anyone wouldn’t have recorded such a jump, of course.

You can watch the live feed of this event above, or you can watch the computer generated rendering of the event below. Red Bull made certain to show the event in more than way so that people across the earth could understand the epic nature of it all. Now that the jump has been initiated, Red Bull has only to cross their fingers and hope that it all goes well – Red Bull will be a drink that people will be downing for generations at this!

This mission is just one of several such jumps that’ve been made by Baumgartner in the past in collaboration with Red Bull. This man also did a skydive across the English Channel and dia a BASE jump from the hand of the Christ the Redeemer statue in Rio de Janeiro – if that doesn’t make you feel like the drink gives you wings, nothing else will. Of course if you weren’t convinced then, today’s record breaker – breaking a record 50 years old, mind you – really should. 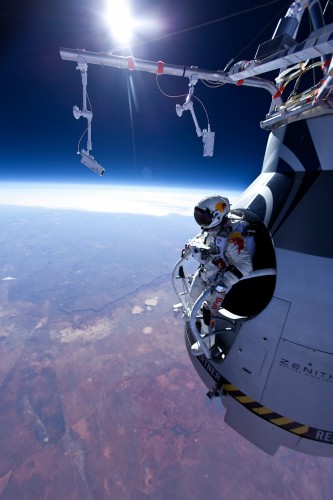 What do you think? Are you more enticed to believe in the Red Bull brand now that a man has jumped from space? Let us know!