New video from the helmet-mounted camera of 128,100 foot skydiver Felix Baumgartner has been released, showing the daredevil’s plummeting return to Earth from the edges of the stratosphere. The video, shown on Austrian TV, is a stomach-turning insight into just how incredible Baumgartner’s dive proved to be, with speeds reaching 833mph at one point. Meanwhile, a mission highlights video from the Red Bull Stratos team makes the whole thing look terribly easy. 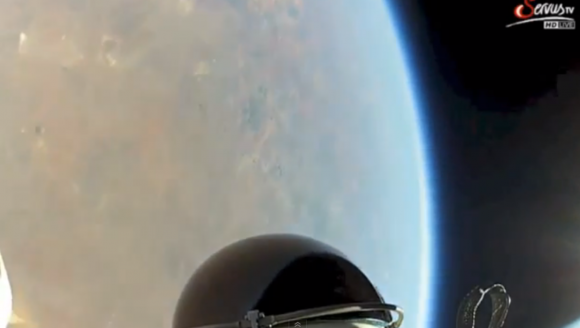 The jump, postponed last week after poor weather made it unsafe, took place on Sunday, October 14. Baumgartner hitched a ride on a helium-filled balloon, climbing to the edge of space in a specially designed capsule.

When the capsule reached 39,045 meters, Baumgartner opened up the hatch, said a few words, and jumped. The climb up took over an hour, but the fall took just 4 minutes 20 seconds, with the skydiver breaking the speed of sound on the way; notably, Sunday was also the 65 year anniversary of Chuck Yeager first breaking the sound barrier, though he required a rocket-propelled plane in order to do it.

“The exit was perfect but then I started spinning slowly. I thought I’d just spin a few times and that would be that, but then I started to speed up” Baumgartner said post-jump. “It was really brutal at times. I thought for a few seconds that I’d lose consciousness. I didn’t feel a sonic boom because I was so busy just trying to stabilize myself. We’ll have to wait and see if we really broke the sound barrier. It was really a lot harder than I thought it was going to be.”

Baumgartner is now the proud holder of several world records, including the highest freefall and the highest manned balloon flight.