HomeNewsPlatypus airboats have a Nexus S for a brain, we go eyes-on...
News

Platypus airboats have a Nexus S for a brain, we go eyes-on (video) 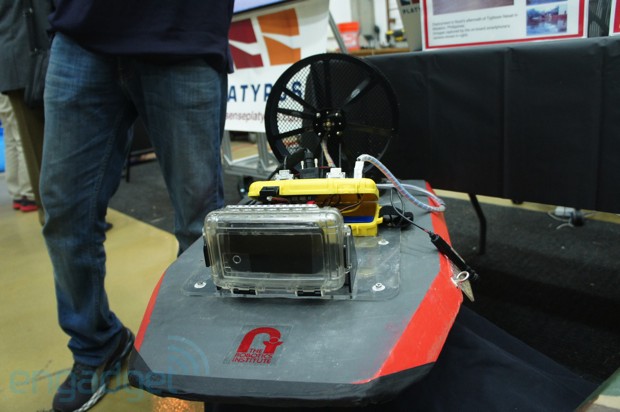 Here’s another extremely cool offshoot of the Carnegie Mellon Robotics Institute. Platypus LLC build autonomous robotic airboats that can be deployed for a wide range of usages including environmental data and monitoring hard-to-reach spots after natural disasters like flooding. The hull of the boat looks a good deal like a boogie board, built from polyurethane. On top, you’ll find a propulsion fan assembly, just behind a hard plastic electronics compartment that houses internals like the Arduino board. That microcontroller communicates via Bluetooth with a smartphone that sits in the front of of the boat, safely cocooned inside an Otterbox case.

The models we saw this week were carrying Nexus S handsets — relatively cheap solutions bought second-hand off of eBay. Just about any Android phone should do the trick, but in the case of this project, where phones can get wrenched loose or just outright pilfered, cheaper is certainly better. Platypus’ proprietary app helps control the boat autonomously, using the handset’s camera to provide situational awareness. Sensors mounted on the boat, meanwhile, offer up information on oxygen and PH levels, temperature and more.

Continue reading Platypus airboats have a Nexus S for a brain, we go eyes-on (video)