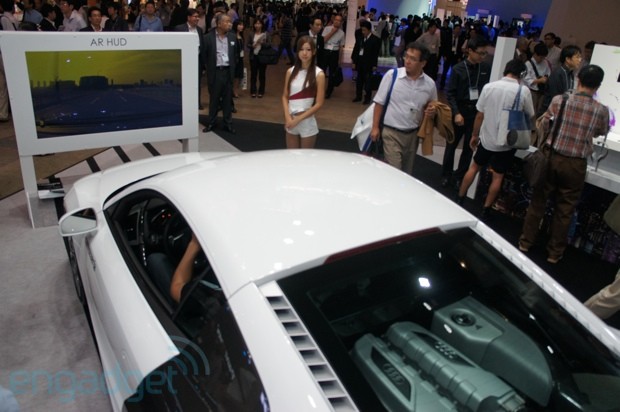 Pioneer has been showing off versions of its AR HUD for some time now, but here at CEATEC 2012 the company is showing off a production version of the thing. It is, as its name implies, an augmented reality navigation unit that shows you where to go using a front-facing camera and a variety of systems. A projector built into the ceiling shines an overlay onto the road ahead, using a piece of plastic that flips down in front of the driver’s eyes.

It’s a cool effect that, unfortunately, we weren’t able to capture on photo or video, so you’ll just have to trust us. But, more photogenic is the rendition that’s created on the slide-out display of the head unit itself, which you can see in the video after the break. Additionally, the system creates a sort of targeting reticule that appears over nearby cars, letting you know when you’re perhaps driving a little too close. (That, of course, is when you have to switch from missiles to guns.) The head unit recently became available in Japan, and while there’s no word on a release date or price in the US, hopefully it won’t be long off.