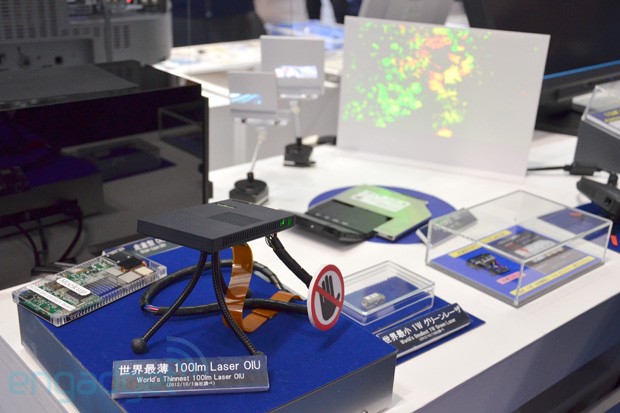 While scanning through Panasonic’s booth at CEATEC 2012, we couldn’t help but notice a prototype of its world’s slimmest 100-lumen laser projector module (or OIU aka optical imaging unit, as the company prefers), which can beam out an 800 x 480 picture. It’s not clear when exactly we’ll see this 7.5mm-thick device getting into consumers’ hands, but there’s certainly room for improvement for the image quality. Likewise, the scan-type OIU (resolution at about 400 x 300) next to the slim projector is far from ready for mass consumption, as the company is hoping to actually shrink it down and integrate it into mobile phones. That said, the fact that this technology doesn’t require focusing makes it worth the wait — the light doesn’t go through an LCD filter like ordinary projectors do, and instead, it’s a single laser beam scanning out the picture, hence the name.

Also shown along side were the optical bay drive pico projector that’s already being offered by Fujitsu, as well as the PJ-SJ25U 854 × 480 DLP pico projector which was released in August this year. While the latter’s image quality was rather impressive even under the strong ambient lighting, we struggle to appreciate the ¥56,800 or $730 price tag. Anyhow, pricing is just a matter time, as always.

Update: The thickness of the slim laser OIU was originally mistyped as “75mm.” This has now been corrected. Many apologies.