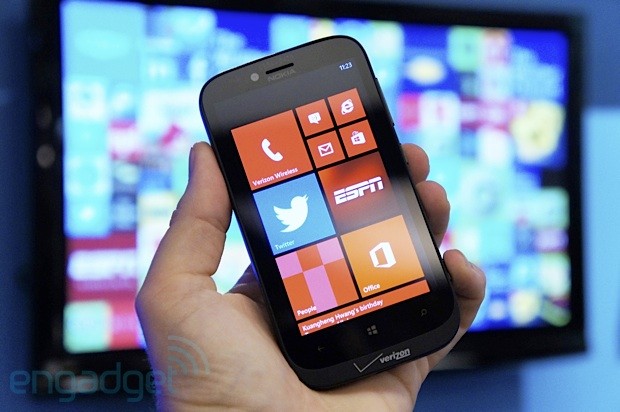 Now that Microsoft’s officially flooded the world with good tidings of Windows Phone 8, it’s the turn of OEMs and carriers to get the word out about their own Microsoft-flavored smartphones. We finally got a chance to play with Nokia’s previously leaked and recently announced Lumia 822 for Verizon, a mid-range handset similar to the Lumia 820 on AT&T and the Lumia 810 for T-Mobile that will cost $99 with a two-year contract. Availability is slated for sometime in November — it’s been a long time since we’ve seen a Nokia device on Verizon (sorry, but those Pantech-built models don’t count), so this is rather exciting news.

In terms of design, the Lumia 822 is much curvier than its siblings and the battery cover doesn’t wrap around the sides. The camera pod and flash placement matches the longitudinal setup from the Lumia 920 and Lumia 810 instead of the transverse layout found on the Lumia 820. At 142g (5 ounces) it’s quite a hefty device, but despite being 11.2mm (0.44 inches) thick, it feels very nice in hand. Build quality is solid, which is pretty much what you’d expect from Nokia. The phone will be available in three colors: black, white and our favorite, a stunning shade of grey. See for yourself in the gallery below, and peek after the break for our hands-on video.

Brad Molen contributed to this report.