HomeNewsNintendo 3DS titles now on eShop in Europe, US eShop in two...
News

Nintendo 3DS titles now on eShop in Europe, US eShop in two weeks

European consumers will be getting a special edition Pikachu 3DS XL by the end of the year, but if you’re in the mood for something a little more immediate, you’ll probably enjoy this next Nintendo Direct reveal. Nintendo announced today that a number of its first-party 3DS titles are now available on the European eShop, including Super Mario 3D Land, Star Fox 64 3D, Mario Kart 7, and The Legend of Zelda: Ocarina of Time 3D. 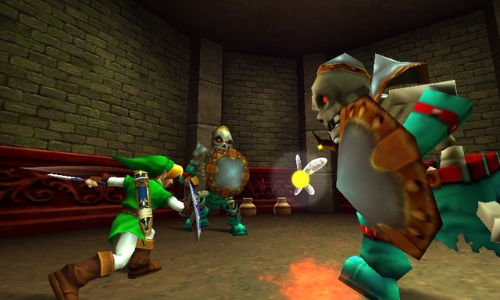 Never fear, US 3DS owners – you’ll be getting these games too, just not today. Nintendo says that all four of the titles listed above will be launching on the US eShop on October 18, and each will set you back $40. True, you could probably find each one of those games for less at a brick and mortar store, but if you want to download from the comfort of your home, it’ll have to be at full price.

All of these are must-haves for 3DS owners, though some of them aren’t particularly new. While Mario Kart 7 and Super Mario 3D Land offer players entirely new experiences, Star Fox 64 3D and Ocarina of Time 3D are (obviously) remakes of the famous N64 games. That said, both have been given a graphics boost on the 3DS, along with some added features – an improved multiplayer mode in Star Fox 64 3D, along with the Master Quest and Boss Rush modes in OoT 3D – so they’re still worth checking out.

Hopefully these are the first in a long line of Nintendo retail releases on the eShop. We’ve had plenty of older Nintendo games pop up on the eShop, but retail 3DS games are an entirely different beast. If Nintendo keeps this up, we have a feeling that our wallets will be running on empty more often than they usually are.

Nintendo 3DS titles now on eShop in Europe, US eShop in two weeks is written by SlashGear.
© 2005 – 2012, SlashGear. All right reserved.