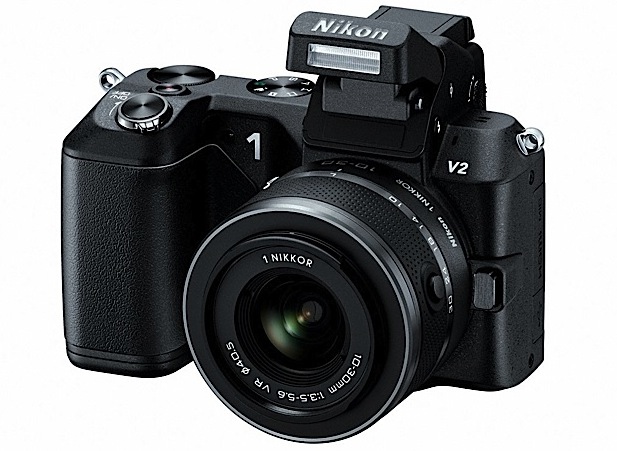 It was just over a year ago when Nikon first dipped its toe into mirrorless waters with its first two 1 System cameras, the V1 and J1. Now, the company has released the V1’s successor, the aptly named V2. Like its elders, the V2 has a 1200fps slo-mo capture mode, a 3-inch LCD display on the back, a high-res (1.4 million dot) electronic viewfinder, and does 1080/30p and 1080/60i video capture (Alas, 4K recording capability didn’t make the cut). Unlike the V1, the V2 comes in only black or white and uses an upgraded 14.2-megapixel CMOS sensor with an ISO range of 160-6,400. It also packs a new Expeed 3A image processor in tandem with Nikon’s Advance Hybrid AF to deliver higher speed shooting. That autofocus system is comprised of 73 phase detect sensors and 135 contract detect sensors, which enables the V2 to capture stills at up to 15fps for 45 continuous frames — and it can shoot 60 frames continuously using fixed focus.

The camera itself looks quite a bit different from its brethren, with a magnesium chassis, a bulked up grip and a built-in flash, plus command and shooting mode dials up top. It’s a layout not unlike Sony’s NEX-7, with one dial enabling easy switching between auto and manual exposure modes and a second providing access to secondary shooting controls like exposure compensation. The camera also has a stereo mic on board along with an external mic jack for recording audio. Would-be V2 owners can grab one with a 10-30mm kit lens for $899.95, and Nikon will add 30-110mm glass to that package for $250 more when it goes on sale in late November. Want to know more? Check out our hands-on with the V2 to see the new shooter in action, and Nikon’s full PR awaits after the break.

Hackers just stole LastPass data, but your passwords are safe