HomeNewsNew vest inflates when you receive Likes on Facebook
News

New vest inflates when you receive Likes on Facebook

We’ve reported on some odd items in the past, but this has to be one of the oddest (and also one of the most intriguing). A group of scientists at MIT have developed a new vest that you can link to your Facebook account. Why would you want to link a vest, of all things, to your Facebook account? Because when people “Like” something that you’ve posted, the vest automatically inflates. 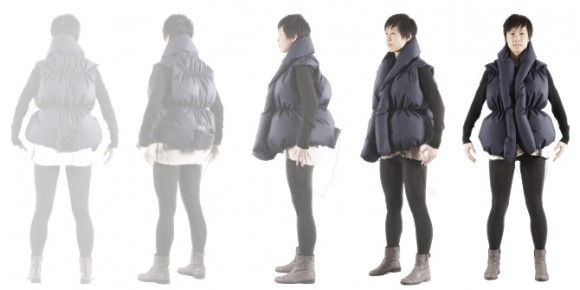 That sounds awfully weird at first, but there’s actually a rather touching reason for its existence. The idea of this vest – which has been dubbed Like-A-Hug – is to simulate the feeling of receiving a hug from your friends. “The vest inflates when friends ‘Like’ a photo, video, or status update on the wearer’s wall, thereby allowing us to feel the warmth, encouragement, support, or love that we feel when we receive hugs,” designer Melissa Chow writes on her website. Chow developed the vest with Andy Payne and Phil Seaton at the MIT Media Lab.

But wait, because it gets even better – by squeezing and deflating your vest, you can make the vest of the person who Liked your post inflate, essentially giving them a hug back. In addition to giving us a quick breakdown of the vest on her website, Chow also posted a video that takes a look at a world where people regularly exchange hugs via the Like-A-Hug. Check it out below:

Okay, so maybe this isn’t going to be something that catches on with mainstream consumers – having your vest randomly inflate could potentially make for some awkward situations, after all – but we have to admit that the idea of sharing “hugs” with people who are miles away is heartwarming. If this vest eventually makes it to market (what we’re seeing is only a prototype with no promise that it will ever become commercially available), would you consider buying one?

New vest inflates when you receive Likes on Facebook is written by SlashGear.
© 2005 – 2012, SlashGear. All right reserved.