NASA’s Robonaut 2 program has spawned an exoskeleton suit that could eventually help disabled people walk again as well as allow astronauts greater flexibility when roaming distant planets. Developed by NASA and the Florida Institute for Human and Machine Cognition (IHMC), the X1 Robotic Exoskeleton weighs 57-pounds and has ten joints, four of which are motorized. However, while like other exoskeletons we’ve seen, the X1 can work to augment the wearer’s movements, it can also be set to work against them. 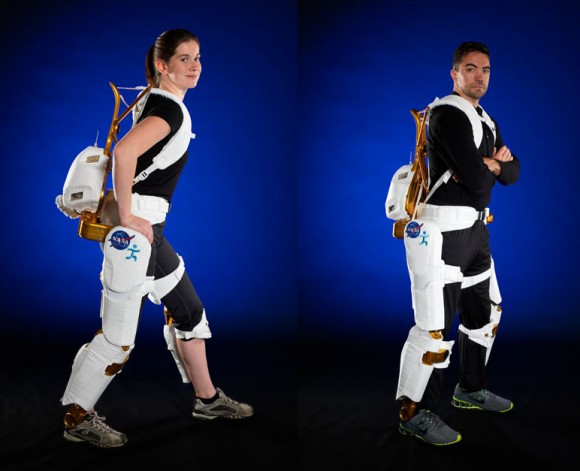 That’s because the requirements for the Earth-bound and those out wandering through space are very different, and the X1 can cater to both. For those with limited or restricted movement, the X1 can be set to support and boost leg motions as an assistive walking device. IHMC is also looking at the potential outside of use by the disabled, such as for tackling varied terrain and extended use of stairs.

For astronauts, however, the X1 could actively work against them, providing Earth-like levels of resistance that normally wouldn’t be present in low- or zero-gravity environments. That, NASA believes, will help avoid muscle wastage, without taking up the space of traditional exercise equipment such as the International Space Station is currently equipped with.

On foreign planets, meanwhile, the exoskeleton could help astronauts clamber over arduous terrain, in addition to making it easier to walk in reduced gravity. Onboard sensors could feed back real-time telemetry of the body’s movements and the wearer’s physical condition.

Currently, only the hip and knee joints are motorized, with the remaining six being passive and allowing for side-stepping, turns, and pointing/flexing a foot to be carried out. However, future iterations of the X1 will include more active joints and thus increase the exoskeleton’s usefulness. NASA has already developed a Robo-Glove in partnership with GM, in a separate project based on Robonaut 2.

NASA warns that the X1 is still in the R&D phase, so we shouldn’t expect to see exoskeleton-clad walkers roaming the streets (or space) any time soon.