NASA shows Hurricane Sandy in 3D and from Space Station

NASA has temporarily repurposed its tropical rainfall monitoring satellite to grab a 3D view of the eye at the center of Hurricane Sandy, while the International Space Station has recorded its progression along the East Coast of the US. The 3D graphics from the Tropical Rainfall Measuring Mission (TRMM) show that Sandy, despite having a relatively small eye, is carrying a whole lot of power, with the space footage showing the extent of the 85mph+ winds approaching the southern New Jersey coast. 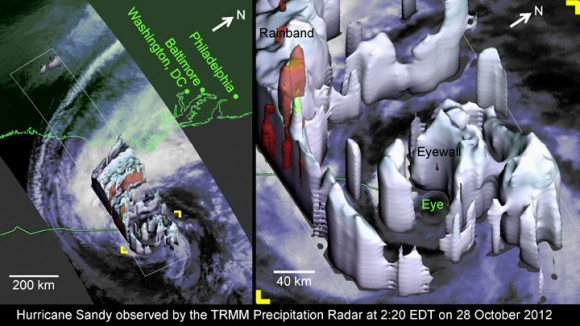 “TRMM-observed properties of Hurricane Sandy’s eyewall are evidence of remarkable vigor. Most hurricanes only have well-formed and compact eyewalls at category 3 strength or higher. Sandy was not only barely a category 1 hurricane, but Sandy was also experiencing strong wind shear, Sandy was going over ocean typically too cold to form hurricanes, and Sandy had been limping along as a marginal hurricane for several days” NASA

As for the ISS view, the space station astronauts have a privileged view of the top-down perspective of Sandy as it gathers steam. The video below shows the live feed from NASA’s cameras, though since the ISS is moving, the correct portion of the US isn’t always in view. NASA says the next clear view will be at 12:45 ET.

NASA isn’t leaving hurricane exploration to the occasional re-use of TRMM, however. The space agency is also midway through preparations for the Global Precipitation Measuring (GPM) satellite mission, launching in 2014, and set to increase the accuracy of extreme weather prediction as well as help meteorologists understand what causes such events.

Of course, while NASA’s imagery is certainly interesting, it’s not especially useful for people on the ground. For that, it’s best to turn to Google’s crisis map which shows the coming storm, active shelters, traffic conditions, and more.

NASA shows Hurricane Sandy in 3D and from Space Station is written by SlashGear.
© 2005 – 2012, SlashGear. All right reserved.