Moog, the company that pioneered commercial manufacturing of analog synthesizers, has shown off a cool new piece of tech. They call it the LEV-96, and it’s a new “sensoriactuator” prototype that “activates and controls naturally occurring harmonics and resonant frequencies on any medium.” Images posted by Moog show the concept device being used on an acoustic guitar. 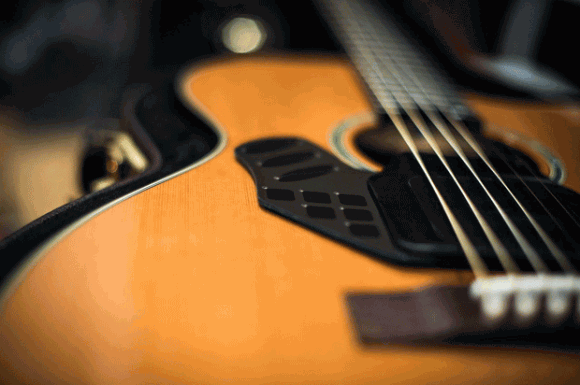 The LEV-96 places two pickups under each string, which totals 12 pickups. The company says that each “pickup channel is capable of controlling any combination of 8 harmonics within each string simultaneously.” So, in this case, there are a total of 96 individual control systems handling up to 96 harmonics.

The whole system is powered by a processor and is controlled through touch-based sliders by the guitar player. This allows adjustments of intensity, harmonics, and note duration. There’s also other settings that allow you to change the arpeggio, tremolo, and other random harmonics. During playing, the system constantly evaluates “each string’s harmonic content and vibrational behavior.”

Sadly, Moog has only released photos of the device, so we don’t know what this thing sounds like, nor do we get to see it in action. However, the company’s annual Moogfest is coming up, so we’ll possibly be able to finally the see thing work its magic. However, Moog says that it’s only a rough concept so far and that there will be a lot more to come in the future.