Get ready, Minecraft Xbox 360 Edition players, because you’ve got a massive update headed your way. Update 1.8.2 is scheduled to launch tomorrow, and it adds a ton of new stuff for you to see and do. PlayXBLA originally reported an October 16 launch date for update 1.8.2, which was later confirmed by 4J Studios, the developer that handled the porting duties when Mojang decided it was time to bring Minecraft to the Xbox 360. 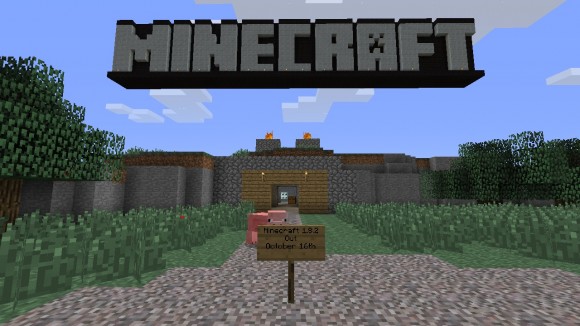 Perhaps the most important addition in update 1.8.2 is Creative Mode. Yes, you’ll finally be able to build with infinite numbers of every item type in a world with no enemies whatsoever, which is a feature Xbox 360 players have been asking for right from the very beginning. Survival Mode is in for a quite a few additions itself, as 4J Studios has tossed strongholds, ravines, abandoned mineshafts, and villages into the mix. Sounds like it’ll be time to start a new world once update 1.8.2 lands.

Not enough for you? Update 1.8.2 also adds a ton of new items to the game, including things like Ender Pearls, chain armor, and melons. You can now sprint if you’re playing in survival mode, and 4J has even made a few biome code additions with this update, adding rivers and oceans. Have a look at the changelog below, but we warn you: it’s really long.

• Added Creative Mode.
• Disabled Achievements and Leaderboard updates if the player is in Creative Mode, or if the world has been previously saved in Creative Mode.
• Added a simple tutorial for Creative Mode.
• Added sprinting to Survival Mode.
• Added flying and sprint-flying to Creative Mode.
• Added new items to the game – Melon, Melon Slice, Melon Seeds, Pumpkin Seeds, Raw/Cooked Beef, Raw/Cooked Chicken, Rotten Flesh, Pumpkin Seeds, Iron Bars, Fence Gate, Stone Bricks, Stone Brick Slabs, Stone Brick Stairs, Brick Slabs, Brick Stairs, Ender Pearl, Web,Vines, 10 more Music Discs, and Chain Armor.
• Added new items to the crafting menu – Melon, Melon Seeds, Glass Pane, Fence Gate, Iron Bars, Stone Bricks, Stone Brick Slabs, Stone Brick Stairs, Brick Slabs, Brick Stairs.
• Added terrain generation features – Strongholds, Villages, Abandoned Mineshafts and Ravines.
• Biome code additions, including rivers and oceans.
• Changed the bow to have drawing and firing action.
• Added a quick move to the dispenser.
• Added a quick equip for armor to the inventory interface.
• Added a quick move for ingredients and fuel in the furnace interface.
• Brought forward the mining speed changes from 1.2.3
• Brought forward apples dropping from leaf blocks from 1.1
• Brought forward change from 1.2.3 to make pumpkins and melons grow from stems much faster, and not require farmland around the stem to grow on.
• Fix to vines brought forward from 1.2.3 to stop them spreading too much.
• Added the Food Bar to the HUD.
• Added stacking for food items.
• Added the eating animation.
• Enabled crafting mushroom stew without a crafting table.
• Added the blocking move with swords.
• Changed all the text descriptions for food to show how much they refill the food bar.
• Passive mobs will now flee when hit.
• The snout on pigs now protrude from their head.
• Skeletons now hold full size bows.
• Animals no longer despawn which makes it possible to capture them.
• Zombies now drop Rotten Flesh instead of Feathers.
• Updated some mob sounds.
• Shears can now collect Tall Grass and the new Vine.
• Improved sunrise and sunset.
• Improved the rain edges (when looking up in rain).
• User-placed leaf blocks no longer decay.
• Cloud height raised to the top of the map, so clouds can no longer phase through blocks.
• Cloud movement syncs with the game’s time.
• Both Wooden and Stone pressure plates can now be placed on fences.
• Improved chest model with a 3D lock, and opening and closing animation.
• Added a countdown timer to the autosave to stop it being such a surprise.
• Added the ability to rename an existing saved world.
• Added map icons to the in-game player list to match their color in the map.
• Added a confirmation dialog on the player choosing to exit without saving.
• Added a character display when sprinting or flying.
• Updated the How To Play HUD with the Food Bar information.
• Added descriptions for Creative Mode and Sprinting to the How To Play menus.
• Updated the Download Content menu with pictures of the DLC available.
• Removed Herobrine.

• Changed the Gamertags Display option to mean display/hide gamertags in-game and on maps.
• Added an option to select Creative Mode or Survival Mode on creating or loading a world.
• Added an option to disable clouds.
• Added additional options to the world creation – Superflat land (creates a flat world near bedrock in both the Overworld and the Nether), enable/disable Structures and Bonus Chest.
• Added Host options – toggles for Player Versus Player, Trust Players to stop players being able to mine without permission from the Host, Fire Spread, TNT Explodes, and Host Privileges.
• Added in-game player options for the host – Can Build and Mine, Moderator, Kick Player, Can Fly, Disable Exhaustion, Invisible.
• Store the Online, Invite Only, and Friends of Friends options in the player’s profile.
• Tutorial World Changes:
• Changed the Tutorial world to enable the new terrain features in it.
• Added mini tutorial for sprinting in the Tutorial world.
• Added mini tutorial for eating in the Tutorial world.
• Added Music Disc Quests in the Tutorial world – players can search the world for the 12 chests, each containing one of the Music Discs that can be played in a Jukebox.

• Fix for duplication glitch.
• Fix for aspect ratio of things in hand when in splitscreen mode.
• Fix for issue with player data not saving (player starting world with no items they had when they saved).
• Fix for redstone tiles burning out when they shouldn’t.
• Fixed issue with Minecart with Furnace not being able to move another Minecart.
• Fixed particle code for flipped 3rd person view.

Oh, look at that – it appears 4J Studios has removed Herobrine with update 1.8.2. It’s a shame too, as Herobrine was really awesome, but what can you do? 4J Studios says that the update will begin rolling out at 2AM Pacific tomorrow morning (October 16), but warns that it may take a few hours before every region has the update. Get ready Xbox 360 players, because you are definitely in for a treat.