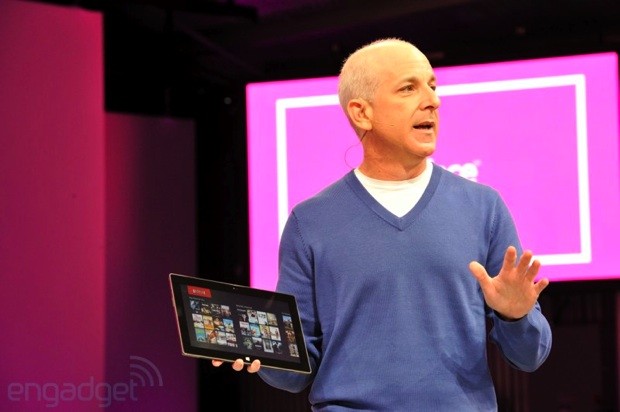 It just wouldn’t be a major Apple launch if there wasn’t a Microsoft executive calling out his old rival, would it? In a chat with AllThingsD, Windows division lead Steven Sinofsky has expressed doubts that Apple’s iPad mini is really a cost-effective pick against the just-launched Windows 8. It’s a $329 “recreational tablet” when there are work-ready Windows 8 laptops that cost $279, he says. He added that there are at least a few touchscreen Ultrabooks that could undercut the non-touch MacBook Air on price, and he ascribed the difference as much to “engineering” as the cost-cutting measures you’d expect.

Sinofsky was naturally just as keen to champion the advantages for work that Windows RT tablets like the Surface have when competing more directly with iPads, alluding to that Office bundle which hopefully keeps us more productive than a copy of Documents To Go. The company President would certainly disagree with Apple chief Tim Cook’s view that Surface is a confused product, calling it a “PC for everyone” that just doesn’t have to be used all the time. He makes valid points on the sheer value for money that you can get from both Windows PCs and tablets, although it would only be fair to mention that he didn’t touch on the currently low Windows RT app selection, or if the OS was exactly what the market wanted — we’d do well to remember that Microsoft alumni have a spotty track record when it comes to predicting Apple’s destiny.

The new feature makes it easier than ever to log in to Spotify.What you need to knowSpotify now lets you
Read more

Picture this: The pandemic is over, you’re in the driver’s seat of a brand new 2020 Tesla Model 3 and the windows are down. You’re cruising through town, taking in the sights and scenery. Sound too good to be true? It’s not.It is certain that there will be a time when COVID-19 will be in the rear view mirror. It’s just a matter of time. As for that whole Tesla part, well that’s entirely possible.For the first time ever, we’re giving away a 2020 Tesla Model 3 to one lucky winner. This luxury vehicle is equal parts speed and safety, reaching speeds up to 140 mph (as always, drive safely and buckle up!). And with a range of up to 250 miles, everyone is going to be calling shotgun whether you’re headed on a road trip or just out for errands.This is our most highly-anticipated giveaway ever and sure to draw a ton of interest. It’s up to you as to whether you bother to enter. And if so, how many entries will you have?Win your own Tesla Model 3!If you’d like to become the proud owner of the Tesla Model 3, we’re here to help. Indeed, we’re helping StackCommerce give away one of the coolest cars on the market.If you head to the AndroidGuys Deals Store right now, you can enter a drawing to win the hot new car from Tesla. There’s no purchase necessary and the method of signing up is dead simple. All you have to do is log in via Facebook and check a box.Once you do, you’ll have two entries. Share the contest on Facebook or Twitter and you can rack up additional entries. Moreover, you can earn extra chances by sharing a URL with friends and family.Note that although you are signing in via Facebook, your information is not being collected by the social media platform. Our friends at StackCommerce and Futurist are backing the giveaway and use the information on their end.The giveaway is open from now until 11:59 PM PDT on 12/31/2020 so there’s plenty of time for you to pick up a ton of entries.Donate to Charity and Win!While there are various ways to increase your chances of winning the Tesla 3, none of them are as easy as donating to charity. Indeed, if you donate just $10 to the Playing For Change Foundation, you will pick up 100 entries.That’s just ten cents per entry, sure, but more importantly it’s a way of creating positive change for children and communities in need around the world.$10 – 100 Entries (10¢ each)$25 – 250 Entries (10¢ each)$50 – 1,000 Entries (5¢ each)$100 – 2,500 Entries (4¢ each)
Read more

OnePlus 8T vs. OnePlus Nord: Which should you buy?