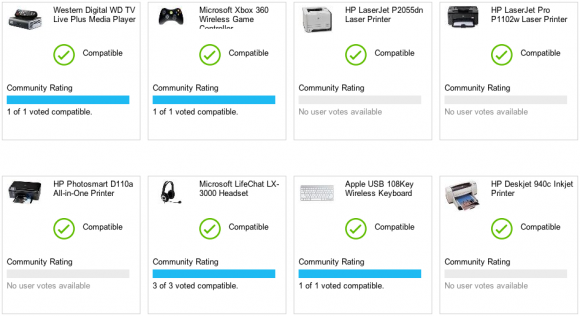 One of the big selling points of Microsoft’s new Surface tablet is the compatibility it has with tons of different USB devices, such as printers, scanners, keyboards, and mice. In fact, Microsoft claims that the Surface running Windows RT supports a whopping 420 million different hardware devices, and the company released a full list of all the products that are compatible with the Surface.

Microsoft launched a Windows RT section on their Compatibility Center website, and they made it easy for users to browse the different devices that can be used with the Surface tablet right out of the box. Pretty much any hardware device you can think of is on the list, including the Xbox 360 controller and even some of Apple‘s own hardware.

The website doesn’t actually list every single device one after another on one page — that would be quite a long list. Instead, they’ve broken it up into different sections, like “Cameras & photo,” “Printers & scanners,” etc. Clicking on one will give you subcategories where you can browse by type or brand.

On top of what the Surface is compatible with, Microsoft also lists products that aren’t compatible, which makes it easier for users to find out if one of their devices does or doesn’t work with their new Surface tablet. You can read our full review of Microsoft Surface tablet to learn more about the device.