Microsoft got in hot water with the European Commission back in 2009 for failing to offer users of the Windows operating system of choice when it came to the web browser used. The solution by Microsoft was to offer European users the browser ballot screen. The screen serves to both inform Windows users that other browsers were available and to allow them to easily install those browsers. Update: Microsoft statement after the cut. 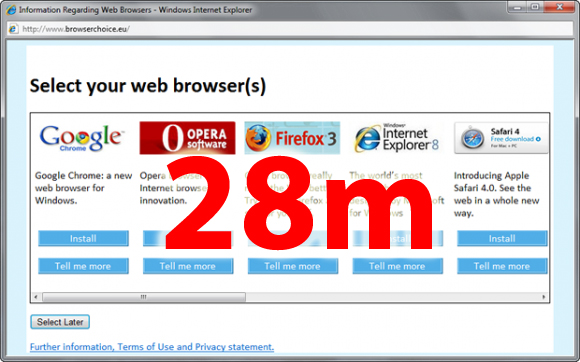 The European Commission agreed that the browser ballot screen would remedy complaints and made the screen legally binding in 2009. The European Commission has sent Microsoft a statement of objections noting non-compliance with its browser choice commitments. Specifically, Microsoft failed to offer the browser choice screen with the Windows 7 Service Pack 1 released in February 2011.

Issuing the statement of objections is a formal step in the Commission investigation. The statement of objections allows Microsoft to reply in writing and request an oral hearing to present comments. The commission will make a final decision after Microsoft has exercised its right of defense. Microsoft faces a gigantic fine for failing to provide the browser choice screen and could be fined up to 10% of its total annual turnover amounting to as much as $7.4 billion.

“We take this matter very seriously and moved quickly to address this problem as soon as we became aware of it. Although this was the result of a technical error, we take responsibility for what happened, and we are strengthening our internal procedures to help ensure something like this cannot happen again. We sincerely apologize for this mistake and will continue to cooperate fully with the Commission”

Microsoft officially informed by EC of failure to comply with browser commitment is written by SlashGear.
© 2005 – 2012, SlashGear. All right reserved.