Apple has revealed a new Mac mini, updating the compact desktop with new processors but keeping the slick, low-profile style. Now packing a 2.5GHz dual-core Intel Core i5 processor, from 4GB of RAM, and a 500GB hard-drive, the new Mac mini is priced from $599. 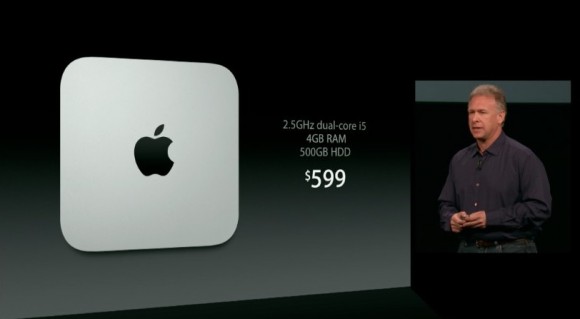 Inside, there’s a choice of up to 1TB of HDD storage or a 256GB SSD. Intel’s HD Graphics 4000 keep your display going – via an HDMI output, among other things – plus there’s wireless connectivity in the shape of WiFi a/b/g/n and Bluetooth 4.0.

There’ll also be a Mac mini Server version, with a 2.3GHz Intel quadcore Core i7 processor instead. It’s paired with 4GB of RAM and twin 1TB hard-drives. Up to 16GB of RAM can be specified.

The Mac mini Server will be priced from $999. It’s up for sale from today. Keep up with all of Apple’s news today at our Apple Hub.