HomeNewsLogitech's K810 keyboard pairs with up to three devices, has a button...
News

Logitech’s K810 keyboard pairs with up to three devices, has a button for switching apps in Windows 8 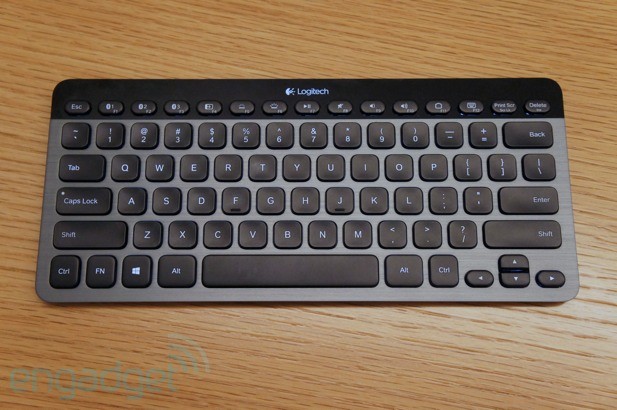 It was last week that Logitech announced two mice and a trackpad, all optimized for Windows 8. As it turns out, the outfit wasn’t quite finished unveiling its Win 8 lineup: the company just outed the Illuminated Bluetooth Keyboard K810, which has a hotkey for toggling between open programs. It also features Easy Switch, a technology first introduced on the K760 that allows the device to pair with up to three Bluetooth-enabled devices at once, regardless of the OS. As for the switching bit, each paired device gets assigned to one of three function keys; just press the button to start using the keyboard with that device. In theory, then, you could have the same keyboard hooked up to your PC, tablet and phone, and be able to type on all of them from minute to minute, though that admittedly seems like an unlikely scenario.

As the product name would suggest, the keys have a backlight glowing from underneath. The lighting will automatically turn off if you haven’t been using the keyboard for a certain period of time, but thanks to proximity sensors they’ll kick in again when the keyboard detects your hands hovering close by. Lastly, the keyboard has a rechargeable battery rated for a month of runtime, though given the fact that it charges over USB, we can see some people bypassing the wireless connection entirely and leaving it plugged in. The K810 will sell for $100. Look for it to hit US stores in October, with European availability following a month later. In the meantime, we’ve got some hands-on shots below. (Psst… the Fn key is where the app-toggling button will be on final models.)

Continue reading Logitech’s K810 keyboard pairs with up to three devices, has a button for switching apps in Windows 8

Logitech’s K810 keyboard pairs with up to three devices, has a button for switching apps in Windows 8 originally appeared on Engadget on Mon, 15 Oct 2012 04:00:00 EDT. Please see our terms for use of feeds.