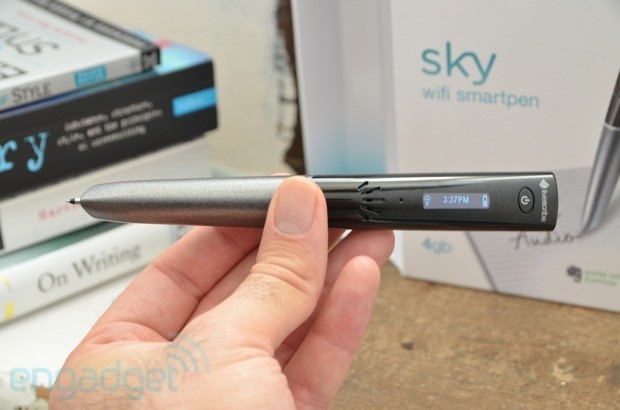 The Pulse pen couldn’t do it. The more recent Echo couldn’t manage it either. But sending notes and linked audio wirelessly is what Livescribe’s latest digital pen is all about. Branded the Sky WiFi Smartpen, it works with proprietary physical notebooks to preserve your handwritten notes and linked audio files on a minimum of 2GB of onboard storage, and then it sends them directly to your Evernote account via WiFi — from where you can access them on pretty much any PC, tablet or smartphone. If you’re wondering a how the pen selects the right network and enters a password, then it’s actually pretty straightforward: Livescribe’s new stationery is printed with connection buttons that, in conjunction with the OLED display on the pen itself, guide you through the procedure in a few seconds. The latest notebooks also have buttons for sending your captured thoughts to Google Drive, Dropbox and Facebook, although those services won’t be activated until early next year.

The basic 2GB Sky pen will arrive in stores on November 1st, priced substantially higher than its predecessor, the Echo (which will be phased out at the end of next year). The new base model will cost $170, with 4GB and 8GB varieties priced at $200 and $250. Arguably, the reliance on wireless cloud storage means that the amount of onboard memory isn’t so important any more, but if you do decide to opt for the most expensive model then you’ll also get a year’s subscription to Evernote Premium, which is worth $45. There’s a short explanatory video after the break, and as you’ll see from the gallery below we’ve already got the Sky pen in our clutches, so expect a full review in short order.

Livescribe outs Sky WiFi Smartpen for $170, lets you record written notes and audio straight to Evernote originally appeared on Engadget on Mon, 29 Oct 2012 00:01:00 EDT. Please see our terms for use of feeds.

Samsung outdid itself — four months ago.Unless you were living under a rock last week, chances are you've heard all
Read more

Huawei has been dealt the final blow by the Trump administration

This is likely the last action by the U.S. against Huawei under Donald Trump.What you need to knowThe Trump administration
Read more