Luxury car buyers looking for a hybrid vehicle might want to check out the new 2013 Lincoln MKZ Hybrid. The EPA recently issued its official fuel efficiency numbers for the 2013 MKZ Hybrid rating the car for 45 mpg in the city, 45 mpg on the highway, and 45 mpg combined. Lincoln brags that its hybrid delivers five mpg better efficiency in the city and combined as the more expensive Lexus ES Hybrid. 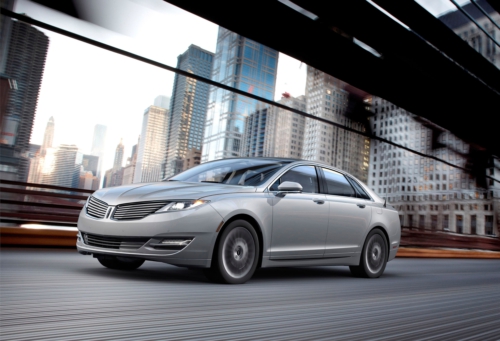 Lincoln says that its hybrid delivers more miles per gallon than any other luxury vehicle in America. The MKZ Hybrid is a mid-size vehicle slotting into the luxury segment of the market. Lincoln also notes that its hybrid vehicle gets two mpg better fuel efficiency in the city and five mpg better efficiency on the highway than the smaller Lexus CT 200h.

That system has an eight-inch touchscreen, and the vehicle gets premium leather seats that are heated in the front, LED headlamps, 18-inch wheels, and Lincoln Drive Control. The Lincoln MKZ Hybrid will hit dealer showrooms later this year with pricing starting at $35,925.