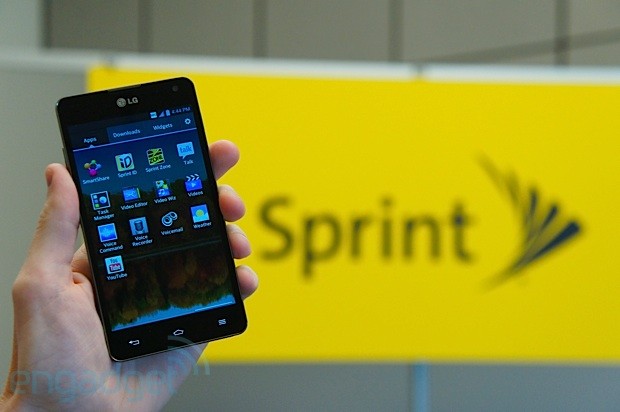 Stop us if you’ve heard this one before, but we had the opportunity to get our hands on the LG Optimus G… again. This would make the excursion lucky number four for Engadget, but this one is a touch on the unique side since it’s heading directly to Sprint at some point in the not-too-distant future. Here’s what we knew up until today: like the Korean versions, this particular flavor of the G — also known as the LS970 — will feature a 13MP rear camera (AT&T’s will only sport an 8MP module), and otherwise carries the same set of features such as a quad-core Snapdragon S4 Pro processor, 2GB RAM, 1.3MP front-facing camera, 32GB internal storage, 2,100mAh battery and 4.7-inch 1280×768 True HD IPS PLUS display. Much like it did on the Motorola Photon Q, Sprint has elected to keep its carrier-specific branding off of the device (it’s doing this so the handset can make its way to the network’s prepaid brands with relative ease), but we were disappointed to see that the SIM card is once again embedded and not accessible without taking the entire phone apart. Aside from these cosmetic differences there’s not much that sets it apart from the international models — something that is a pleasure to see, instead of the standard carrier practice of tweaking OEM designs to their own whimsy.

The performance expectations set by the Korean Optimus G seem to be met here, with the 1.5GHz quad-core Krait processor running the show. Despite the G using a custom build of Ice Cream Sandwich (which will be upgraded to Jelly Bean soon, according to Sprint), we were highly satisfied with how quick everything was during our time with the device — it truly acts and feels the same as its overseas counterpart. The downside that you’ll find with Sprint — as you might imagine — is Sprint’s infant LTE network; customers getting this phone in a city not blanketed by the next-gen network will find themselves frustrated with lackluster EVDO speeds. To get a closer look at the Now Network’s flavor of the Optimus G, go below to see a full gallery of images and then head past the break for a video tour.

Myriam Joire contributed to this report.