Tablets may prove to be the death of print magazines, but Lexus still has some uses for paper, paring both print and an iPad for its new animated advert. The 2013 Lexus ES launch campaign also debuts CinePrint, the car company’s clever blending of print and digital: load up the CinePrint Lexus app, put your iPad underneath the printed advert, and – with the lights down – the whole thing is animated. 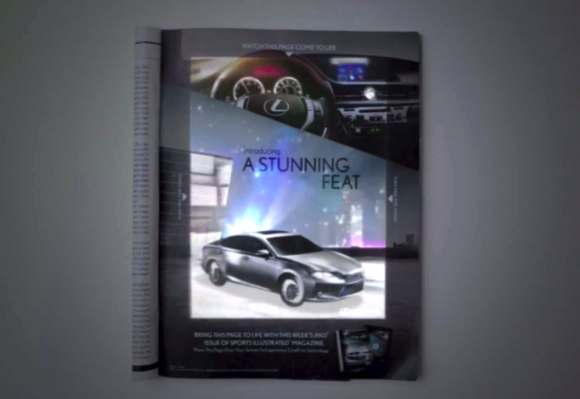 The actual mechanics of it all is very simple – the light from the tablet’s display shines through, and makes the print graphics look like they’re moving – but the end result is mightily impressive. Most importantly, it gets you looking at both the print and digital versions, and for adverts getting viewers to pay attention is the key thing.

The potential for CinePrint arguably goes beyond advertising. We could also see the system being used for children’s books – where the printed copy is a standalone book in its own right, but can be augmented with animation when there’s a tablet available – or even instruction manuals, walking through more complex processes with video explanations.

We can’t see the Lexus app in the App Store yet, and it’s not clear which magazines the company will be printing the companion physical page in. If you’re impatient, you can find more details on the 2013 Lexus ES here, a four-door sedan priced from $36,100 for the gas version and $38,850 for the hybrid.