Kickstarter officially launches in the UK 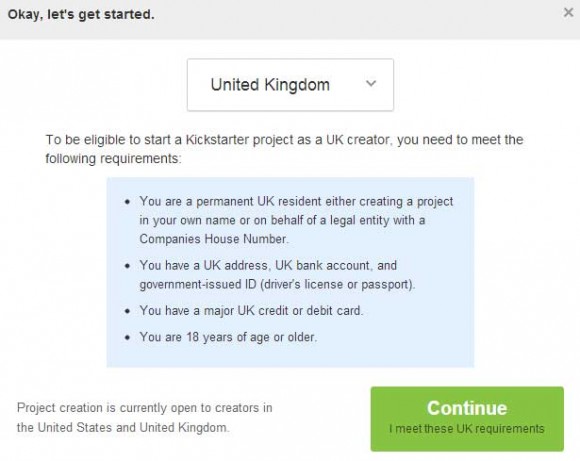 We haven’t heard much from the folks at Kickstarter over the last month. In fact, the last time Kickstarter mentioned its coming UK launch on its official blog was back on October 10. On that day, Kickstarter announced that it would be launching in the UK on October 31.

Today being October 31, the launch is now official, and you can start your own project in the UK. That is assuming you meet the criteria for starting a UK project. There are a few caveats to start the UK project, mostly centering on the fact that you have to live in the UK. Kickstarter requires that you be a permanent UK resident creating a project in your own name or on behalf of the legal entity with a Companies House Number.

People starting a project for the UK also need to have a UK address, and UK bank account, and a government issued ID. You will also need a major UK credit or debit card and have to be at least 18 years old. As Kickstarter mentioned before, there is no specific UK page. Projects from the US and the UK will be intermingled, and people from either country can back projects in the US or the UK.

All projects in the UK will be listed in pounds sterling while people pledging from outside the UK will see the approximate conversion rate to US dollars before they make their pledge. It’s unclear at this point if you will be able to see only projects in the US or UK if you’re not interested in funding projects outside your home country.

Kickstarter officially launches in the UK is written by SlashGear.
© 2005 – 2012, SlashGear. All right reserved.