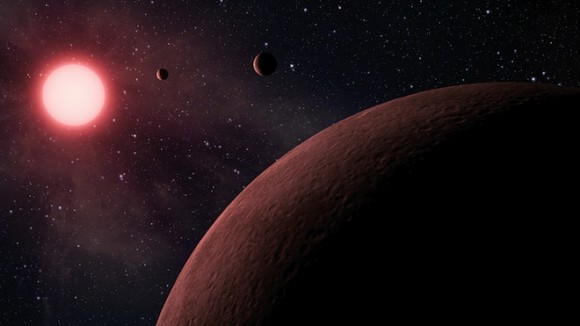 The scientists on the team discovered that a star dubbed KOI-500 has five different planets orbiting around it within a fraction of the distance between Mercury and our sun. The discovery was made by a planetary scientist from the University of Florida at Gainesville named Darin Ragozzine. The planetary system is approximately 1100 light years from the Earth in the direction of the constellation Lyre.

The planets orbit their parent star so closely, and at such a high speed that a year is only a matter of days here on Earth. Despite orbiting so close to the star, the planets have an orbital resonance that prevents them from colliding together or collapsing into the star. According to Ragozzine, when the planets are ranked based on how long it takes the planets to orbit the parent star, going from the innermost to the outermost, it takes the planets one, 3.1, 4.6, 7.1, and 9.5 Earth days each for a single orbit.

The scientists say that the system has a unique planetary relationship with the four outer planets existing in a type of orbital resonance that returns the planets to a set formation every 191 days. This orbital resonance keeps the planets from being knocked from orbit by each other’s gravitational fields and cast out further into the solar system or into the star. The scientists also say that four planets is the largest number ever discovered existing in resonance with each other. The KOI-500 star system is believed to be quite young, perhaps only 1 billion years old. The star itself has a similar mass as our sun with a diameter only three-quarters of our sun.