Jurassic Park was a movie that captivated audiences when it launched back in 1993 (has it really been that long?). Today, we’re getting a behind-the-scenes look at the construction of the Velociraptor suits for the movie in a new video that comes courtesy of the Stan Winston School of Character Arts. In it, Stan Winston Studio supervisor John Rosengrant takes us through the process of not only building the raptor suit, but performing in one too. 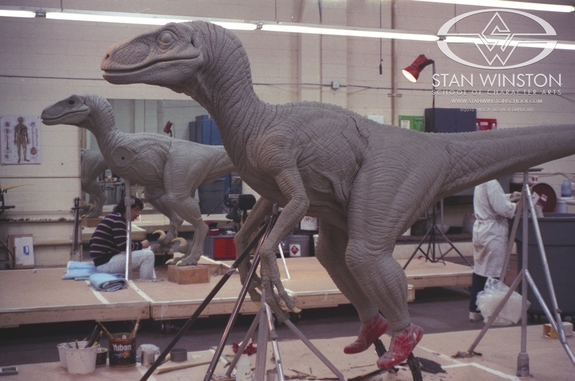 True, most of the dinosaurs we see in Jurassic Park were computer-generated, but for some shots, Spielberg and his production team needed either animatronics or people in dinosaur suits. The scene in the kitchen where Lex and Tim are being hunted by two Velociraptors was apparently one of those scenes, and Rosengrant was actually in a Velociraptor suit during that shot. The folks at Geek Tyrant were surprised to find that out, and we have to say that we’re right there with them – up until now, we simply thought those raptors were entirely computer-generated. In watching this video, it becomes apparent just how much work Stan Winston and the folks at Stan Winston Studio put into Jurassic Park, despite the fact that one of the biggest draws of the movie was its use of computer-generated dinosaurs. Stan Winston did his job well though, as evidenced in the fact that we’re only today finding out that there were actually men in raptor suits during some of those scenes. It’s really a fascinating look behind-the-scenes, and we have to recommend that any fan of Jurassic Park check it out below.

Pretty cool, huh? It won’t be long before Jurassic Park is back in theaters, ready to captivate a new generation, as a 3D re-release of the movie is scheduled to release in April of next year. We’re not sure how we feel about that, but dinosaurs in any form are always better than no dinosaurs at all. What do you think of this video? Are you impressed with the work the folks at Stan Winston Studio put into Jurassic Park?

Jurassic Park’s Velociraptor built from ground up in new behind-the-scenes video is written by SlashGear.
© 2005 – 2012, SlashGear. All right reserved.