HomeNewsJohn Hodgman on the death of publishing and being a Mac trapped...
News 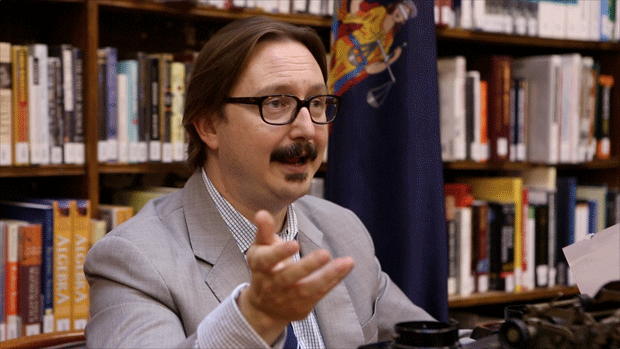 I’m fully prepared to complete every sentence I utter about John Hodgman in the future with the qualifier “is a delight.” Author, comedian, professional voice actor, celebrity spokesperson — Hodgman keeps the sort of schedule that would make even the most hardened globe-trotting blogger ball up into the fetal position. When we finally nailed him down for an interview on the Engadget Show last month, we asked him to meet us at the General Society for Mechanics and Tradesmen in midtown Manhattan. It’s a place not far from Times Square that our producer Ben discovered while shooting a segment about the annual meeting of the Corduroy Appreciation Club, a group of menswear enthusiasts who meet each year on 11 / 11 — the date most closely resembling corduroy.

It’s a strange and beautiful old space that dates back to the early 19th century, as a resource for apprentices of a society that can, in turn, be traced back to 1785. It seems to serve a different purpose now, a couple of older gentlemen shuffling in and out of the library during the three hours we spend there, each staying quiet, seated alone at a small table, reading novels and history books from off the shelves. For today, however, it’ll serve as John Hodgman’s own private library, the tongue-in-cheek backdrop for his long-awaited Engadget Show interview. Ben and I go back and forth a bit, prior to his arrival, debating whether or not he’ll embrace the silly premise. He agrees immediately after traveling in from Brooklyn, offering up a single, key caveat: it’s actually the annex to his own private library.

The cameras roll and without missing a beat, he slips into his deranged millionaire persona, a character that has popped up a bit over the past few years, as Hodgman has wrapped up his trilogy of “complete world knowledge,” the last entry of which, “That is All,” was released in paperback and audiobook forms this week. “This,” the mustachioed author explains, “is the end of world knowledge.” It’s a journey that began in 2005, with the publication of “The Areas of My Expertise,” an almanac of sorts compiling the comedian’s knowledge of “matters historical, matters literary, matters cryptozoological and hobo matters,” to name but a small cross-section. Hodgman was a self-described former professional literary agent at the time, first making a splash amongst the literati some five years prior with the publication of the column “Ask a Former Professional Literary Agent” for uber-hip San Francisco publisher McSweeney’s.

John Hodgman on the death of publishing and being a Mac trapped in a PC’s body originally appeared on Engadget on Wed, 03 Oct 2012 13:00:00 EDT. Please see our terms for use of feeds.