If the bizarre 18s teaser-trailer for Iron Man 3 whet your appetite – basically a trailer for a trailer – then you’ll definitely be wanting to head beyond the cut to see the full trailer for the upcoming Marvel movie. Seeing Robert Downey Jr. reprise his role as Tony Stark, Iron Man 3 pits the eponymous hero against The Mandarin, played by Ben Kingsley, who – if the trailer is anything to go by – seems determined to blow everything up. 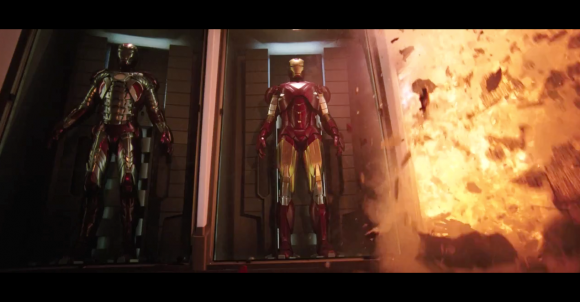 That includes Stark and his wife Pepper Potts, with Gwyneth Paltrow returning to gather some new bruises as she’s apparently violently kidnapped. Val Kilmer and Don Cheadle are also on the star list.

“With his back against the wall, Stark is left to survive by his own devices, relying on his ingenuity and instincts to protect those closest to him” Marvel says of the film. “As he fights his way back, Stark discovers the answer to the question that has secretly haunted him: does the man make the suit or does the suit make the man?”

It’s all textbook superhero-movie stuff, but that doesn’t mean we’re not excited. There’s plenty of time to build up enthusiasm, too, with the movie not expected to open in theaters until April 2013.