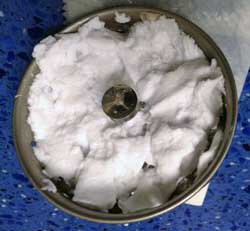 A good example is Apple, and the biodegradable packaging that it uses for some components in its fifth-generation iPod Touch and the seventh generation iPod nano. Specifically, the little holder that cradles the EarPod apparently turns to a pile of mush when exposed to water. According to Mashable, these products marked the first time that packaging Apple uses completely breaks down when exposed to water.

Note that the packaging doesn’t entirely melt away to nothing. What you end up with is a pulpy mush that looks akin to a sheet of notebook paper left out in the rain. Interestingly, it only takes a few minutes of exposure to water for the EarPod holder to break down. You might think that Apple would be proud of easily biodegradable packaging, but apparently, Cupertino is playing coy.

Mashable reports that Apple wouldn’t confirm the findings and simply pointed them to a page that speaks about “renewable tapioca paper foam material.” Certainly most of us are going to run our packaging underwater to dissolve them, but when the stuff ends up in a landfill, it’s nice to know that a decent rainstorm will pretty much melt the package away.

iPod EarPod holder package turns to a pile of mush in water is written by SlashGear.
© 2005 – 2012, SlashGear. All right reserved.