In case you missed all of the hullabaloo, the iPad Mini and the fourth generation iPad were revealed earlier today, and both of them are sporting 4G functionality. Now, all Apple enthusiasts need to do is decide where they’re going to purchase their shiny new tablet. Verizon has announced that it will offer both the fourth generation iPad and the iPad Mini at launch, so if you’re looking to take full advantage of their 4G capabilities, Verizon might be a good choice. 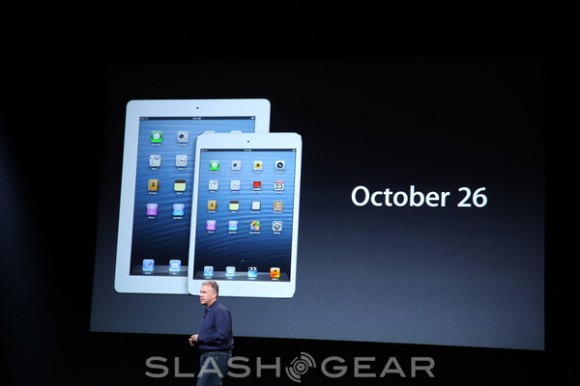 Of course, Verizon was listed in that rundown of carriers for the iPad 4 we saw earlier today, but that Verizon will be getting the iPad Mini at launch is news to us. Verizon touted the fact that it now has 4G LTE service in more than 410 markets across the country, which comes with a download speed of “5 to 12 megabits per second (Mbps) and upload speeds of 2 to 5 Mbps.” In other words, if you feel the need for speed, Verizon can deliver it – so long as you’re in a coverage area.

If you go for the fourth generation iPad, you’ll be getting your device a little quicker than soon-to-be iPad Mini owners. The fourth generation iPad is scheduled to launch on November 2, which is just over a week away. By comparison, Apple won’t start shipping out 4G iPad Mini until a couple of weeks after the Wi-Fi-only version’s November 6 launch, so you’ve got about a month to wait for that one.

The iPad Mini with Wi-Fi and 4G will set you back $459, while the fourth generation iPad with 16GB of storage and 4G capabilities costs $629. Verizon says that it will be offering a “range of attractive data plans,” with both the fourth generation iPad and the iPad Mini, but didn’t go into much depth about the individual plans. Will you be picking up your new iPad from Verizon, or will you be buying one elsewhere?