HomeNewsHulu Plus app heads to Windows 8 PCs and tablets, tailored for...
News 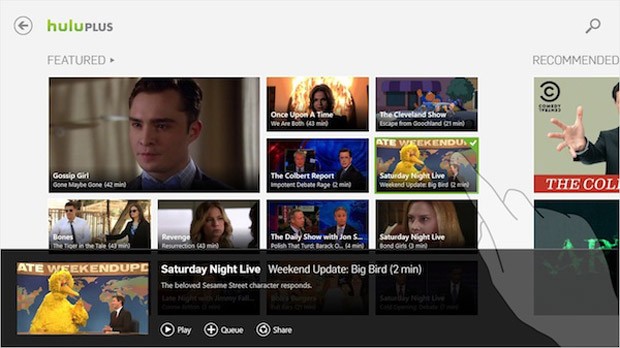 Windows 8 users, what with their “Modern” UI and pinned applications, won’t have to stoop to using Hulu Plus in an antiquated internet browser any longer. Hulu today announced its brand new Windows 8 and Windows 8 tablet application, which is designed specifically for use with the tiled UI that Micrsoft’s new multiplatform OS is based around. The new app aims to take advantage of that UI in a variety of ways — pinning an episode or show to your start screen, for instance, or multitasking with other apps while Hulu continues playing in a smaller window, cropped to the left. We’ve dropped a video walkthrough of the app just below the break.

Those with early access to Windows 8 can grab the app right now in the Windows Store through this link (at least, when it goes live again — it seems to be down right now); the app will be available to the rest of us at launch on October 26th, and on Windows 8 tablets the same day.

Hulu Plus app heads to Windows 8 PCs and tablets, tailored for new UI (video) originally appeared on Engadget on Mon, 22 Oct 2012 14:51:00 EDT. Please see our terms for use of feeds.