HomeNewsHTC One VX for AT&T hands-on: mid-range style on a budget (video)
News

HTC One VX for AT&T hands-on: mid-range style on a budget (video) 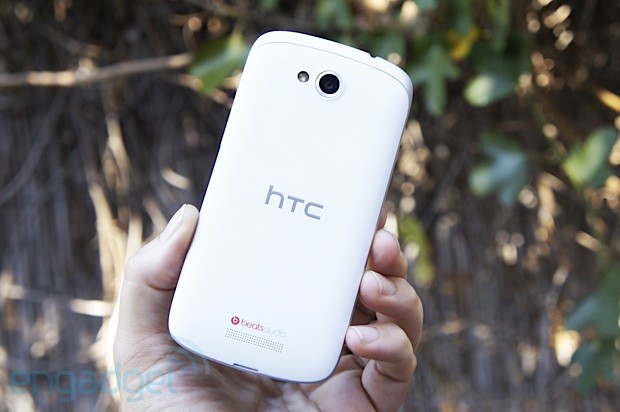 What do you get when you raid HTC’s parts bin and combine the camera from the One V, the screen resolution from the One S and the design language from the One X? Say hello to HTC’s One VX for AT&T, a stylish mid-range smartphone running Ice Cream Sandwich and Sense 4. It features a 4.5-inch qHD Super LCD 2 display with Gorilla Glass 2, Qualcomm 1.2GHz dual-core Snapdragon S4 processor (MSM8930) with GSM/EDGE/UMTS/HSPA+/LTE radio, 1GB DDR2 RAM, 8GB of on-board storage and a five megapixel f/2.0 autofocus BSI camera with flash and 1080p video recording.

The front glass incorporates the earpiece, AT&T logo and VGA shooter up top along with the usual capacitive buttons (back, home and recent apps / menu) below the display. A silver plastic rim traces the sides of the handset — it’s a simple and familiar layout, with the power / lock key, headphone jack and secondary mic on top, micro-USB port and primary mic at the bottom, and the volume rocker on the right edge. Pop the white plastic back cover and you’ll find micro-SIM and microSD card slots, a non-removable 1810mAh battery and the NFC antenna.

Unfortunately, we were given a non-functional dummy unit to play with so we can’t comment on things like screen quality or subjective performance. We can tell you that the phone is light, thin and feels good in the hand — it slots somewhere between the One S and the One X in terms of size, and looks nice despite being made of cheaper materials than its stablemates. AT&T and HTC are still mum on availability but we were told to expect aggressive, budget-friendly pricing. Want to see more? Take a look at our gallery below and our hands-on video after the break.

Update: we expect to see a working One VX at today’s AT&T announcement so stay tuned for more impressions.