HP‘s acquisition of Palm and its webOS mobile operating system may have turned out to be somewhat of a failed effort, but webOS is nowhere near extinct. They just brought open webOS out of beta a few days ago, and it sounds like they have some big plans for the now-open source mobile OS. It turns out HP is hiring over 50 developers to help out the open webOS movement.

According to the job listings, HP is looking for 53 top-class developers to work in both Shanghai, China and Sunnyvale, California. All of the positions appear to be high-paying jobs as well, so it seems that HP is putting a lot of time and resources into its webOS platform, which has been slowly disappearing the past couple years. 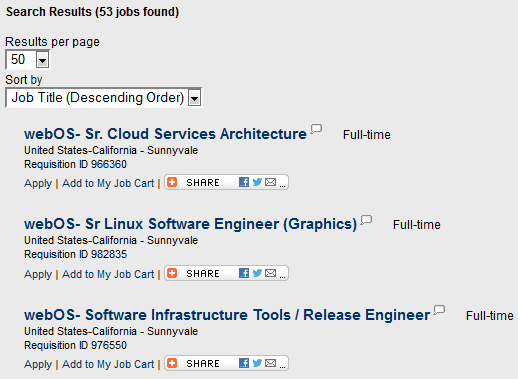 However, that brings us to the lasting appeal of the platform. Even though HP is starting to put more effort into webOS, that doesn’t necessarily mean that it’ll become successful. The company has stiff competition from Apple’s iOS, Google’s Android, and Microsoft’s Windows Phone 8. Is it possible that HP’s open webOS can make a dent in the other mobile OS platforms?

Either way, HP’s looking at a long road ahead. CEO Meg Whitman said that she expects the company to struggle all next year and not make a profit until 2014 comes around. Even then, the company isn’t exactly guaranteed a profit. We can only hope for the best for open webOS and just wait for some new devices from HP to hit the market. Hopefully they don’t crash and burn this time around.