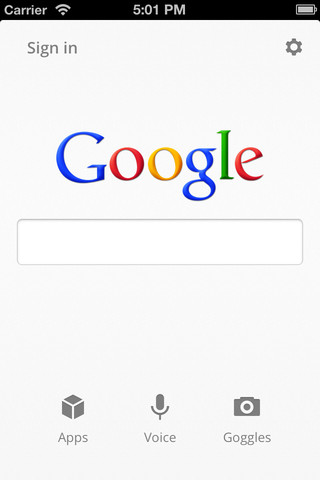 We’ve all seen the commercials: an individual holding a conversation with their iPhone as if it were a real person. Siri responding back in a human-like manner, acting as an electronic assistant, making life seemingly easier while providing the occasional moment of amusement when you ask her where you can hide the bodies or some other witticism. Google announced earlier today that it has released a new Google Search app for iOS that includes updated and expanded voice features for a more Siri-like experience.

The updated Google Search app allows users to communicate their inquiries in a natural fashion while receiving responses that pull from the massive resources of Google. For example, users can ask what something looks like (What does a kumquat look like?), and Google Images will automatically open, displaying the search results for your question. Alternatively, tell the app to play a specific movie trailer, and the video will start automatically.

To initiate a voice search, simply tap on the microphone icon and speak. If the response to your question is short enough, the app will speak the answer back to you. Says Google, “The new Google Search app for iPhone and iPad helps you [find information] with enhanced voice search that answers any question with the comprehensive Google search results you know and love.”

The system is powered by Google’s Knowledge Graph, which helps the app associate a search with its intended meaning. While the app proves to be sleek and more interactive than previous offerings, it still isn’t quite up to Siri’s level for iOS users. Siri is integrated into iOS, allowing users to control their Apple device with voice commands, such as pulling up a new email composition, while Google Search offers no such capabilities.

What is Intercultural Business Communications?

Skillshare Free Trial: Learn for a month for free