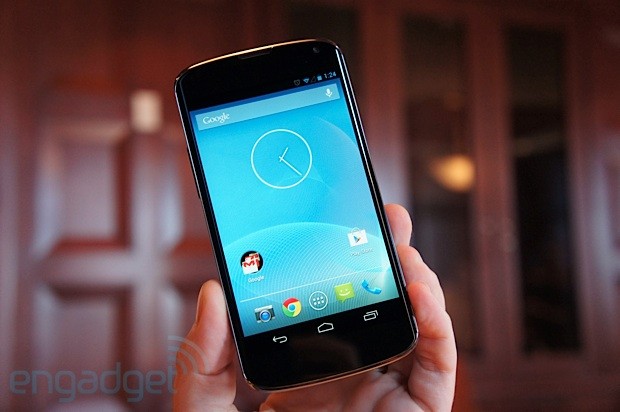 So here it is at last, the Nexus 4. After countless leaks we finally got a chance to put our dirty little paws on Google and LG’s lovechild. The verdict? It’s simply phenomenal. By combining the nicest elements of the Optimus G with the latest iteration of Jelly Bean (Android 4.2) the two companies have created something that’s better than the sum of its parts. Like its cousin, the Nexus 4 is built around Qualcomm’s speedy 1.5GHz quad-core Snapdradon S4 Pro SoC with Adreno 320 graphics and 2GB of RAM. Storage comes in 8GB and 16GB flavors with no microSD expansion. It features the same lovely 4.7-inch 1280×768-pixel non-PenTile IPS display but sheds LTE support for an unlocked pentaband DC-HSPA+ (42Mbps) radio and wireless charging. On the camera front the Nexus 4 inherits the Optimus G’s optional eight-megapixel BSI sensor and f/2.4 autofocus lens, instead of the fancier 13 MP shooter. WiFi b/g/n, Bluetooth 4.0, A-GPS, NFC and Miracast round up the spec sheet, and a sealed 2100mAh Li-polymer battery completes the package.

Aesthetically, the Nexus 4 blends aspects of the Optimus G and Galaxy Nexus designs, with a glass-covered back and rounded-off top and bottom edges. This phone looks and feels great — materials and build quality are much improved over last year’s handset. At 9.1mm (0.36 inches) thin and 131g (0.31 pounds), it’s also very comfortable in hand. Most of the controls are unchanged from its cousin — you’ll find a standard 3.5mm headphone jack and secondary mic on top, a volume rocker and micro-SIM tray on the left, a micro-USB port and primary mic on the bottom, and a power / lock button on the right side. The Optimus G’s capacitive keys give way to on-screen buttons and the RGB notification light moves below the screen (from its former position near the 1.3-megapixel front-facing camera). Overall we’re really impressed with the Nexus 4, and that’s just from playing with the hardware. Sadly, we spent very little time exploring the software, which includes a plethora of improvements, so keep an eye out for the details in our full review.

Brad Molen contributed to this report.