At this point, we’re pretty sure that the LG Nexus 4, the Samsung Nexus 10, and the Nexus 7 32GB all exist. We were supposed to find out if our suspicious are correct on Monday, but thanks to the threat of Hurricane Sandy, Google has been forced to postpone its Android event that was originally scheduled for October 29. Thankfully, the folks at BriefMobile are here with a new video to whet our appetite for some Nexus 10 action, giving us a brief glimpse at the much-rumored tablet. 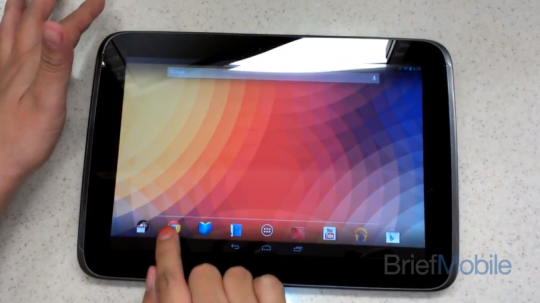 When we say “brief,” we mean it too – the video is a mere 5 seconds long. It would appear that the person who leaked the video to BriefMobile is a master at the art of trolling, as five seconds isn’t enough time to do much of anything. Indeed, we only see a split-second shot of the lock screen in the video, followed by the user booting Chrome. Other than that, there’s nothing, so here’s hoping that you weren’t holding out for anything big.

Still, with this video we get some solid evidence of the Nexus 10′s existence, along with a glimpse at that snazzy 2560 x 1600 display. From a display standpoint, the Nexus 10 certainly looks like an excellent tablet, and rumors have been suggesting that it has some solid innards to go along with that beautiful screen. We’ve been hearing that the Nexus 10 will be sporting a dual-core Samsung Exynos 5250 processor clocked at 1.7GHz, 2GB of RAM, a five-megapixel rear camera, and 16GB of internal storage. The source of this leak also confirmed that the Nexus 10 will have GPS, so we’ve got that to look forward to as well.

BriefMobile’s leakster also said that the back of the Nexus 10 is made of polycarbonate material, and that the whole device is very slim and lightweight. It sounds like Google could have a hit on its hands with the Nexus 10, so now all we need is a reveal and we’ll be set. Even though that reveal won’t be coming on Monday as originally planned, you can bet that Google will want to host its event as soon as possible once Hurricane Sandy subsides. Keep it tuned here to SlashGear for more information!