Ever since Notch announced that he was handing off the main development duties on Minecraft to Jens Bergensten, Mojang fans have been waiting with bated breath to see what he’ll do next. Earlier this year, Notch announced a new passion project called 0x10c, but in the time since that announcement, he’s been relatively quiet on the game’s progress. We’ve been given small updates here and there, but nothing all that substantial. Today, however, we’re getting a peek at the first footage from the game, and you can check it out after the jump. 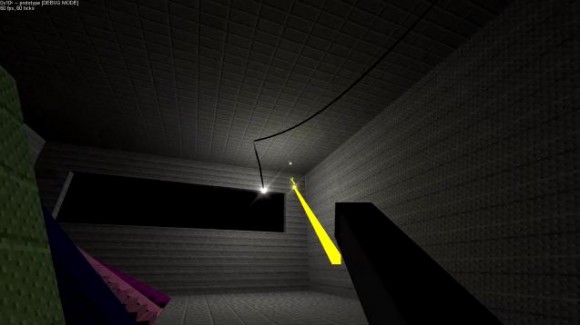 What you see below is nothing more than a bare-bones tech demo, and the video is actually unlisted on YouTube, which suggests that Notch may not have wanted to share this with the masses. In any case, it’s been discovered, and it offers a good look at the engine Notch has developed for the game. In the video, we get to see 0x10c‘s physics at work, and also get to watch as the player character fires off his gun numerous times.

0x10c is still obviously in the very early stages of development, but this should do something to satiate the players who are hungry for Notch’s next game, at least for a little while. The style looks similar to that of Minecraft, but the game should be sporting a different art style by the time Notch releases it. Regardless of the artwork, this is definitely something to get excited about, so have a look at the video below:

0x10c is something of a space management sim set in the far distant future. It will take place in a persistent in-game world, and each player will have a fully programmable 16-bit computer at their disposal. Notch plans to release 0x10c in the same way he released Minecraft, launching an alpha version early and then providing frequent updates, but there isn’t a solid launch date for the game just yet. If you’re interested in finding out more about the game, you can follow development updates on 0x10c‘s official website.