HomeNewsFacebook goes down around the world in apparent Anonymous attack
News

Facebook goes down around the world in apparent Anonymous attack

If you’re trying to get on Facebook at the moment and the site isn’t cooperating, you’re definitely not alone. The Next Web is reporting that throughout the day, Facebook has gone down in places like Austria, Norway, Germany, Greece, France, Italy, and Sweden. Making things much more interesting is Twitter user AnonymousOwn3r, who is claiming to be the one bringing Facebook to its knees. 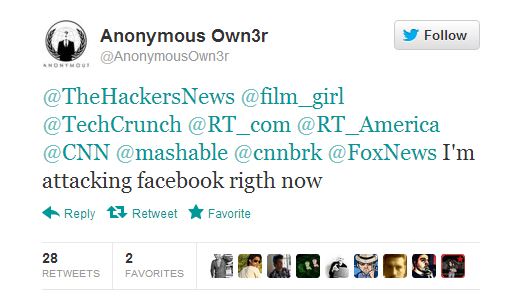 If AnonymousOwn3r is telling the truth, then that would mean the now-infamous group Anonymous is behind the Facebook outage. Just a few minutes ago, he tweeted that he’d be halting his attack so people could get back on the social network, but it’s hard to tell if he’s telling the truth. As far as we can see, he hasn’t given a reason for his attack on Facebook, only saying that he tried to carry out the attack yesterday but was unsuccessful.

It seems that he has enjoyed plenty of success today, though, apparently bringing Facebook down across Europe. The Next Web reminds us that this is the same Anonymous member who claimed the attack on GoDaddy last month. That attack brought down millions of GoDaddy-hosted sites and kept them down for hours, effectively making millions of site owners angry in the process.

It seems that this was an attack on Facebook’s DNS servers, as trying to access touch.facebook.com brings up the site with no problems. If AnonymousOwn3r is serious when he says that he’s halting his attack on Facebook (and he’s responsible for bringing Facebook down in the first place), then the service should be coming back across Europe soon. If you live in Europe, do you have access to Facebook yet, or is it still down for you?

Facebook goes down around the world in apparent Anonymous attack is written by SlashGear.
© 2005 – 2012, SlashGear. All right reserved.