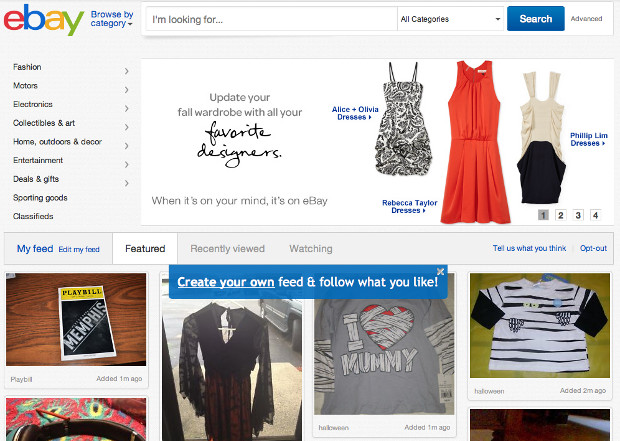 After eBay finally straightened out its logo and became ebay (it’ll always be camel-cased in our hearts) it seemed only logical that the site itself would get a long overdue facelift too. At a press event today in NYC the tenacious dot-com holdover unveiled the most dramatic redesign of its long and storied existence. The look has been compared, repeatedly in the media, to Pinterest with its endless, uneven grid of product boxes and curated feed of auctions. The design is cleaner, with less text and better suited to scale for mobile and the upcoming onslaught of touchscreens. You can also like auctions on Facebook, which it hopes will drive more traffic to the site. The company quietly launched eBay Lifestyle Deals as well, a local coupon service in the vein of Groupon and Google Offers. Right now the deals are only available in a few major cities, including Washington DC, San Francisco and LA. SF is also the beneficiary of eBay Now, the same-day delivery service that entered beta testing in early August. There isn’t an immediate expansion to accompany the end of the trial, but more cities should be added soon. If you’re not seeing the new design yet, look for the “Feeds” option on the home page to switch over now.