Earlier today, astronomers announced the discovery of an exoplanet called 51 Pegasi b orbiting Centauri B, part of a system that is one of our solar system’s closest neighbors. The star is the lowest-mass planet discovered to date, with a mass almost identical to Earth. Although close to Earth and similar in mass, it’s also close to its star, meaning it’s very hot and very uninhabitable. 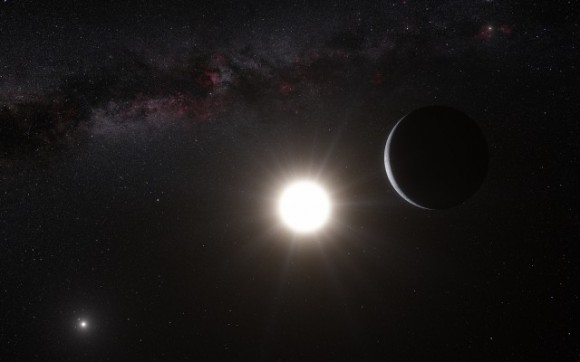 The Alpha Centauri system is located a tad more than four light years from Earth, and is home to two stars, Centauri A and Centauri B, in addition to the red dwarf Proxima Centauri. Centauri B, which the exoplanet orbits, has a “Sun-like mass.” Most exoplanets orbit distant stars, making this one a memorable find.

51 Pegasi b was found when researchers, using the High Accuracy Radial Velocity Planet Searcher spectrograph, were monitoring the ten brightest and nearest stars from the Sourthern Hemisphere. When a planet orbits its host, the resulting gravitational pull results in a motion that looks like a “wobble” when observed. It took four years of observing these effects to determine that the data indicated a planet.

According to the astronomers, these types of small planets often form in groups, with about 70% being discovered in multiple-planet systems. This gives hope that additional planets may be discovered in the vicinity. Presently, the team responsible for the discovery estimates they could spot a Super Earth in Centauri B’s habitable zone.