You don’t find sharp and pointy teeth on most modern herbivores, sharp and pointy teeth for killing prey are generally associated with meat-eating animals. A new study of a dinosaur dubbed the Pegomastax africanus found the dinosaur had tiny self-sharpening fangs. Scientists believe that the two-foot-long heterodontosaur lived about 200 million years ago. 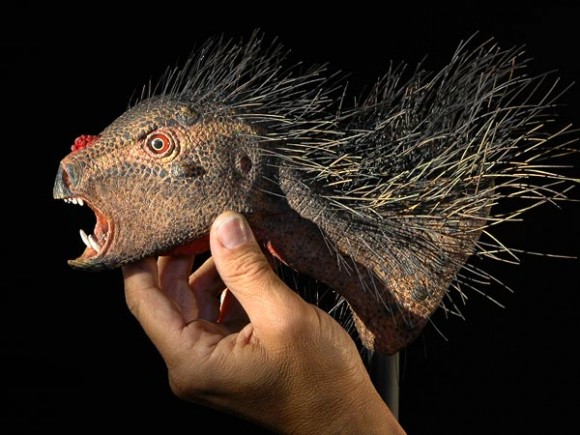 Scientists believe that the tiny dinosaur exclusively ate plants and used its sharp and pointy fangs for self-defense. That would make the little dinosaur similar to modern plant eating mammals that use teeth for self-defense and foraging. The new dinosaur species is believed to have lived along the forested rivers in southern Africa.

The first fossils of this tiny dinosaur discovered in South Africa in the 1960s. In an attempt to discover what the little dinosaur did with it sharp fangs, study author Paul Sereno reassembled available teeth and jaw bones for the little dinosaur and compared them to reconstructed jaws and teeth of meat eating and modern plant eating mammals.

Sereno found evidence that teeth the P. africanus was equipped with were similar to those of fanged deer and peccaries that use fangs for self-defense and in competition for mates. The scientists also suggests that P africanus’ upper and lower jaws worked like self sharpening scissors for sharing plants for the dinosaur to eat.

Dwarf dinosaur had vampire fangs but ate plants is written by SlashGear.
© 2005 – 2012, SlashGear. All right reserved.