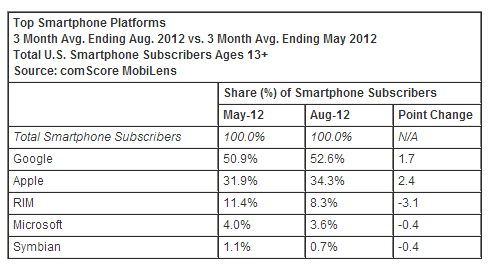 The latest comScore figures are out and seem to suggest that not a lot has changed over the last three months.  As expected, Android is still the top mobile platform at 52.6 percent, followed by Apple at 34.3 percent. RIM ranks third at 8.3 percent share, followed in fourth by Microsoft (3.6 percent) and Symbian (0.7 percent).

Things will certainly get interesting the next time we see these figures as we factor in the Galaxy S III, iPhone 5, and other models begging for your back-to-school buck.