Typically, when we talk about pollution, including carbon emissions, the numbers are talking about entire areas rather than specific locations. Researchers in the US have developed a new software system that is able to accurately map carbon emissions at the street level. The new system allows you to see each individual building, and the carbon emissions that it produces. 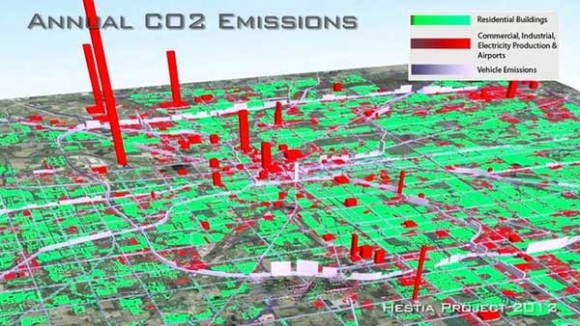 The software system is able to generate the street-level carbon mapping by combining information available from public databases with traffic simulations and energy consumption models. The researchers hope that the new software tool will help identify the most effective places to focus on for reducing carbon emissions. Scientists from Arizona State University called the system Hestia.

Other data used by the researchers to get the street-level details includes air pollution reports, traffic counts, and tax offices. One of the project leaders, Doctor Kevin Gurney, said that he and his team know the system is working because the results it produces are consistent with existing information on emissions. So far the researchers have used the software in Indianapolis and are working on mapping for Los Angeles and Phoenix.

The scientists say that not only can the new software system help cities target specific buildings or streets to reduce emissions, the software can also be used to track the benefit of changes made at specific sites. The researchers also hope that Hestia can be used to give greater credibility to carbon trading.

“Nobody buys a stock that’s ten dollars plus or minus five dollars,” said Kevin Gurney. “We have to have confidence in the numerical value of something. We have to have the same level of confidence about a unit of emissions.”

Carbon emissions mapped at street level by researchers is written by SlashGear.
© 2005 – 2012, SlashGear. All right reserved.