Hordes of gamers around the United States and the world are waiting with anticipation for the Call of Duty: Black Ops 2 launch. The official launch of the game is set for November 13, which is only a couple weeks away now. A new live-action launch trailer aired officially for the first time yesterday. The new live-action trailer was directed by Guy Ritchie and features Robert Downey Jr. piloting a fighter jet. 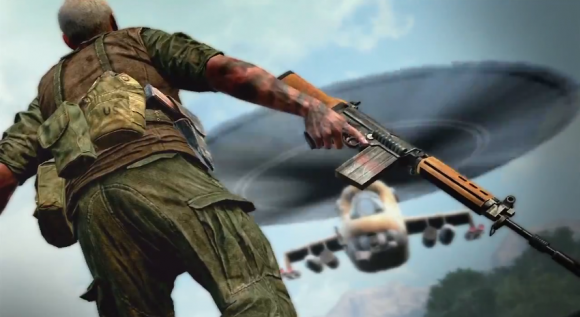 The trailer is titled Surprise and aired on TV last night during Monday Night Football. Activision will also be airing the game worldwide on other high-profile TV broadcasts, including European football matches. Apparently, some of the other people you see in the trailer are “celebrities” including a French comedic actor Omar Sy.

Other cameos are by so-called Internet phenoms FPSRussia and iJustine. Activision has also announced that it has teamed up with Bad Robot Interactive to release a Call of Duty take over for the Bad Robot Action Movie FX app. That app is available so free download for Apple gadgets.

The app will let fans record video of real-world environments and then add in their own mayhem using weapons from Black Ops II. Fans can also use the scan function in the app to unlock exclusive new weapons in the app from the game. Black Ops II will be one of the biggest games of the year. You can check out the live-action launch trailer below.