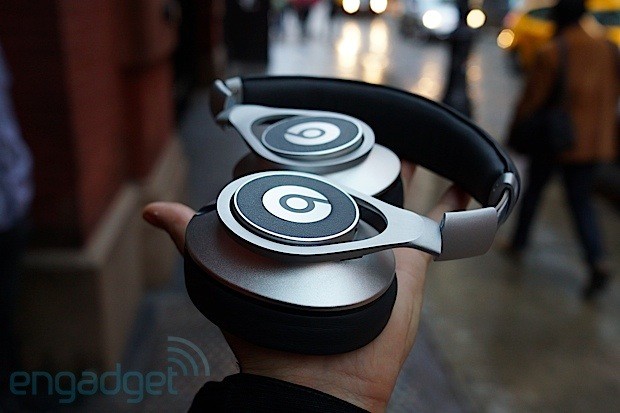 Aside from announcing its entrance into the portable Bluetooth speaker category today, Beats Electronics has also launched its first new set of headphones post-Monster. Aiming to cater to the jet-setting business crowd, the company is classing things up with its (finally released) $300 Executive noise-cancelling over-ears. The design of the headphones seems to be a blend of the Mixr and classic Studios, wrapped in brushed aluminum that’s complimented by dark gray leather pads and the requisite “b” on each earcup. Requiring two AAA batteries for power, these active cans (read: they don’t work passively) are rated to last up to a healthy 25 hours. The Active noise-cancellation functionality is aided along by two microphones inside the headphones that automatically adjust the effect depending on your surroundings. That said, we’d be remiss not to note that ANC is always enabled, as it’s tethered to the power — you know, to help avoid making your head ring from the likes of jet engines and subway cars. A detachable 3.5mm cable is included, featuring a 3-button in-line remote and mic and a right angle jack on its end. While we’re fans of 90-degree jacks, we found that this one couldn’t plug into our cased iPhone 5 fully, rendering the remote useless. Lastly, you’ll notice from the photo above that the earcups on this pair thankfully fold flat, allowing for easier storage that its Solo and Studio siblings in a briefcase and the like.

We only had a paltry few minutes to try out the cans, but we came away with good vibes about them. To get this out of the way, the voicing from its drivers is totally colored and seems to have that typical Beats S-curve with boosted sub-bass and treble — a stark contrast from what you’d get with a passive set like the V-Moda M-100 cans. Compared to a similar active pair like like the Klipsch Mode M40, the sound is much more aggressive and lively. Although we listened in a quiet hotel room, the ANC circuitry did seem to dampen a significant chuck of the ambient noise around us — however, it did have a very noticeable hiss (more apparent than similar cans) from it that we’d likely become annoyed by without music. The earpads are very supple and moderately deep, and the inside of each earcup has some padding over the driver which should help you to evade the dreaded cartilage cramps. The headphones feel extremely sturdy and miles more robust the plasticky Studios, all while still retaining a light feel free of excessive clamping force on this editors head — very similar, actually, to what we enjoyed with the Parrot Zik cans. All in all, while these aren’t the first aluminum clad cans from the company, the Executive headphones really seem like they could stand to be a much better option than the Studios for overall value. Of course, we’ll let you know either way when we come to our conclusion. For now, the Executive headphones are on sale today from the Beats Electronics and various retailers if you’d like to try ’em out for yourself.

Beats By Dre launches Executive noise-cancelling headphones, keeps ’em dapper in aluminum for $300 (ears-on) originally appeared on Engadget on Tue, 16 Oct 2012 11:30:00 EDT. Please see our terms for use of feeds.